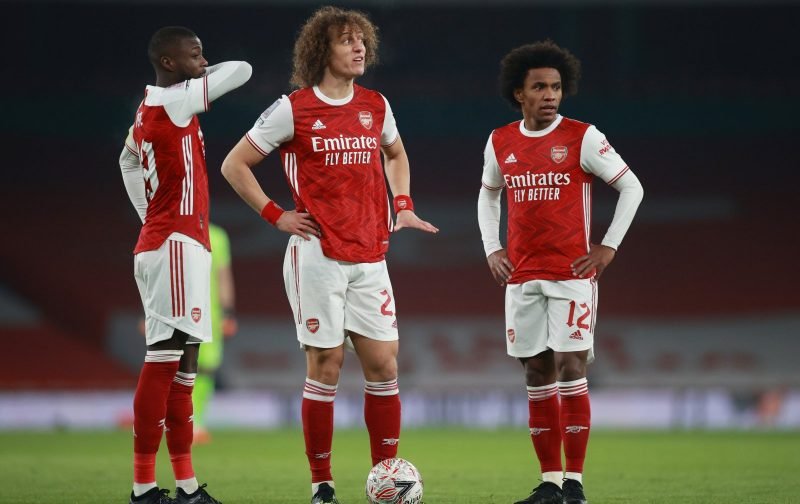 Arsenal are unlikely to offer David Luiz a new contract at the end of his current deal which expires after this campaign, according to The Metro.

The publication is claiming that the Brazil international is yet to be offered a new deal by the club and that nothing new is in the works.

Arsenal are fairly well-stocked at centre-back with the likes of Pablo Mari, Rob Holding, Calum Chambers and Gabriel Magalhaes all at Mikel Arteta’s disposal beyond this year.

However, you have to question any potential release of the former Chelsea man, who has been a key figure for the club over the course of the last couple of seasons. Luiz’s performances may have left a lot to be desired during certain periods, but, his leadership qualities and ability on the ball out of defence are gold mine for the current first-team.

During his recent absence due to a knee injury, there has been a big void at the heart of Arsenal’s backline. The recent hammering at the hands of Liverpool highlighted just how badly the side struggle to cut through big teams without a passer from centre-half.

Arsenal created just three shots on goal as they struggled to move the ball through the thirds and up the pitch. During his long and distinguished career, the former Benfica man has been known for his supremer quality on the ball especially his long-passing.

The key aspect of possessing some like the 33-year-old is his innate leadership qualities. Given how far and wide the ace has travelled he has proven a key member of the dressing room not just for the youngsters, but, also in guiding the Emirates Stadium giants to success.

Letting the £4.5m-rated veteran leave so soon into the club’s rebuild would be a devastating mistake from the club, given how short they are on valuable experience across their current club.

In other news, Darren Bent has claimed Arsenal are better without this star man.