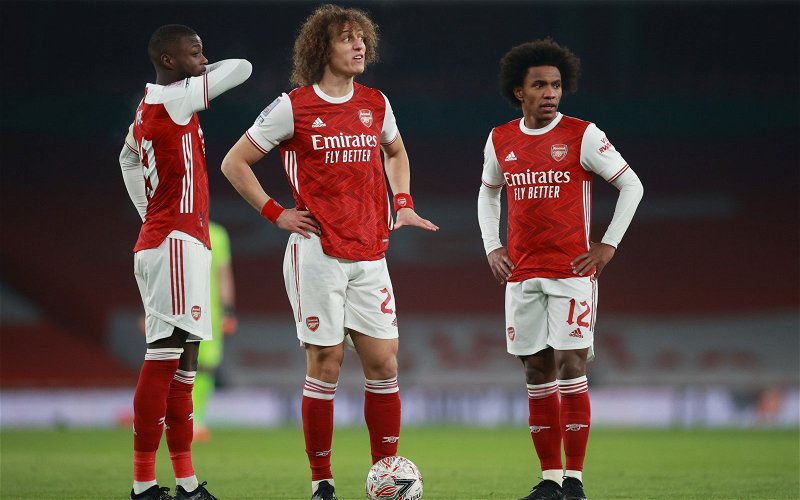 David Luiz is set to be offered a new contract at Arsenal after he impressed Mikel Arteta with his influence over some of the younger stars, according to the Independent.

The club’s policy about offering contracts to over-30s is generally to hand out one-year extensions and was on show when the Brazilian signed a short-term deal last summer.

However, Pierre-Emerick Aubameyang broke that rule when he signed a new three-year deal during the start of the current campaign.

There will be some fans who will have their head in hands wondering what they’ve done to deserve another season of watching the £5.4m-rated former Chelsea man. However, the fact of the matter is, he’s been incredibly consistent since his disastrous cameo against Manchester City back in June last year.

Remember that? The defender replaced Pablo Mari in the early minutes of the first half before gifting Raheem Sterling the opener, getting sent off and conceding a penalty.

Ever since he has been monstrous in the centre of defence and helped the north London outfit lift the FA Cup with starring shows against the Citizens and his former club. Furthermore, you could write a novel the length of War and Peace on youngsters whose career he’s impacted in his 18 months with the club.

The likes of Joe Willock, Riess Nelson, Bukayo Saka, Emile Smith Rowe and Gabriel Martinelli have all been helped by the Brazil international in their development.

Luiz’s is far and away from a disastrous player and handing him a new deal would help retain his leadership qualities, which this current Arsenal team lack.

In other news, Tony Adams fumed over these three signings.