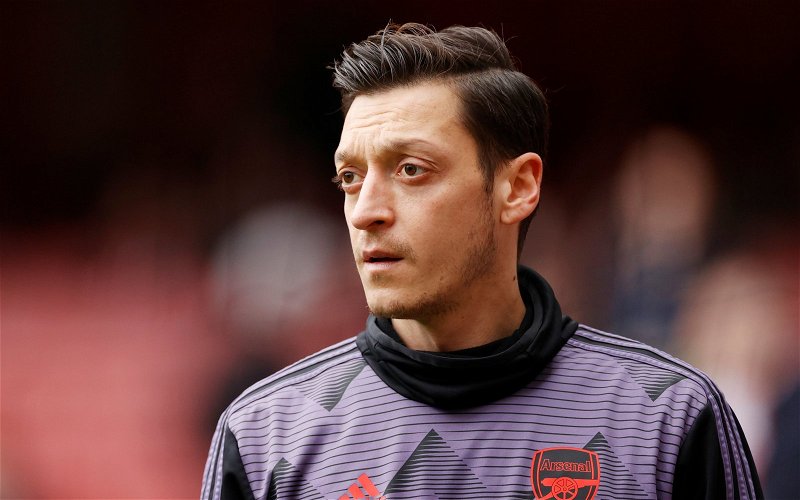 Freddie Ljungberg questioned Mikel Arteta’s decision to leave Mesut Ozil out of his Premeir League squad back in October.

The German was left out of the 25-man squad with his contract expiring at the end of the current campaign.

Appearing on Sky Sports’ coverage of Leeds United’s clash with the Gunners, the Swede also claimed that whilst he believes leaving the 32-year-old out is a mistake, he doesn’t think there’s a place for him within the system.

Ljungberg said: “Yes, he maybe doesn’t have the athleticism now that is demanded in the Premier League, so you lose a little bit of that.”

“But I felt that we should be good enough. So I think when you play Manchester City and they have the ball all the time and all you do is run after the ball the whole time, maybe that’s not the game for having Mesut on the pitch. But if you want creativity, his left foot is fantastic.”

“I think you have to look at the way Arsenal play now, with the system they play – where would you put him?” (Sky Sports via Football Daily)

I have to completely disagree with Ljungberg’s assessment of Arsenal’s current system. The side played a 4-2-3-1 formation yesterday, showing that Ozil could easily feature under the former Manchester City coach. The way Arteta is choosing to play this campaign is wrong and it’s not working at all. Why would you choose such robotic tactics which leave players isolated?

Pierre-Emerick Aubameyang has usually been stuck out on the left, meanwhile, Willian and Pepe are told to pass the ball off more than take on their defender as seen by their significantly lower dribbles per game compared to last season.

There’s a stark lack of creativity in the final third from the north London outfit, who have scored no goals from open play in any of their last five Premier League games. It’s quite telling that their clearest sight at goal in yesterday’s encounter came from right-back Hector Bellerin’s defence splitting-pass as opposed to any of their attackers.

To say Ozil can’t get into Arteta’s current system is just wrong and wrongly justifies the Spaniard’s decision to leave the German out. Arsenal have shown they require the playmaker’s services and to leave him out was an incredible mistake.

In other news, one talkSPORT host wasn’t happy that this figure has escaped criticism despite the Reds’ poor start to the season.