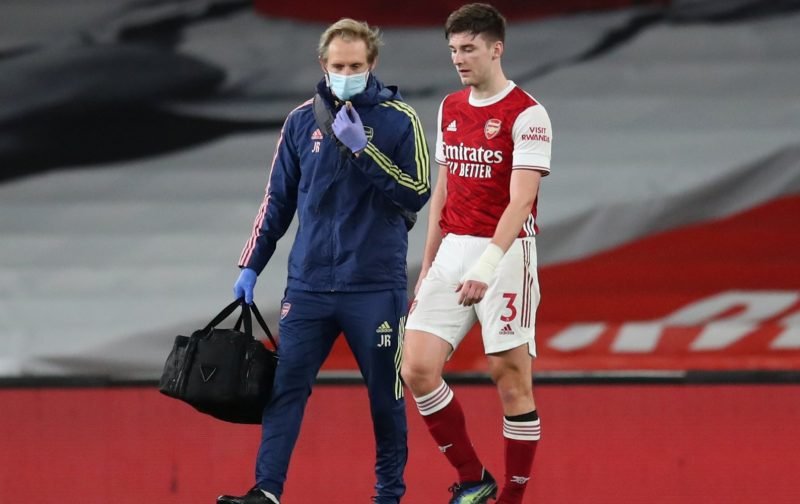 The Scotsman has enjoyed a great start to life in north London, having already won the FA Cup and Community Shield in under two years.

Speaking to BBC Scotland’s Sportsound, the former  Blackpool midfielder claimed the defender would fetch a transfer fee of £50m+ in the current market.

Adams said: “Would it surprise me if a Real Madrid, a Man City or any of the clubs in the top echelons come in for him in the summer? I think he’s ready now. He’s 23, he signed for Arsenal injured and was out for a spell with groin and shoulders problems.”

“But he’s come back and has matured into a top player. I believe he can go to the next level again. You’re starting at £50m too.”

With every great player comes the risk of losing them should you not meet their expectations. Arsenal can bear testament to this given how badly have struggled to keep hold of their star players over the last decade or so.

The likes of Robin van Persie, Samir Nasri, Cesc Fabregas and Alexis Sanchez have all left for pastures new having fallen frustrated with the club’s lack of success/progression.

Such circumstances have been curbed in recent seasons, however, that’s more due to the fact Arsenal have assembled a mediocre squad that has failed to maintain the club’s Champions League ambitions.

It’s hard to disagree with the Scotsman considering the consistent level Tierney has been playing at since joining the club. His mixture across attack and defence has been evident on the left-flank, especially in the final third.

The 23-year-old’s crossing ability has added a new dimension to Arsenal’s game and in the modern game, where full-backs are more like wingers, he proves a valuable asset to many, many big teams.

With the Scotland international improving month-by-month, you’d struggle to find a big club who wouldn’t take a chance on the young ace, who encapsulates the modern day left-back.

In other news, one stat shows how badly Arsenal are in danger in the Europa League