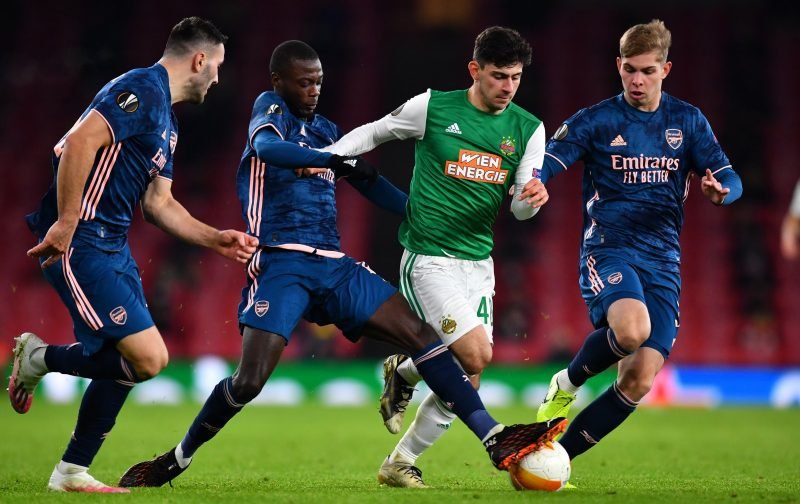 Danny Simpson has sung the praises of Arsenal youngster Emile Smith Rowe following his goalscoring contribution to the side’s 4-1 win over Rapid Vienna.

The 20-year-old climbed off the bench to slot home Ainsley Maitland-Niles’ cross for his first goal for the in over 700 days.

Following a horrendous last few years, which has seen the young gun get battered by injury after injury, he looks set to make his breakthrough into the Premier League line-up. Creativity has been an issue for the Gunners all season long and now’s the time for the Croydon-born ace to secure his berth.

The north London giants have scored just 10 times in their 10 league games thus far, struggling for some creativity in the final third. Smith Rowe could be the one to provide the cutting edge that has been missing with Mesut Ozil having been frozen out. Across just 43 minutes in the Europa League, Smith Rowe already has a goal and assist, his ability to find space and push higher up into the penalty box is something that has been seriously lacking the top-flight.

Static forwards has been a crucial part of why Mikel Arteta’s men have struggled, especially in the last game against Wolves. Heat maps from the clash showed that the front three of Bukayo Saka, Willian and Pierre-Emerick Aubameyang stuck to their positions with very little movement. Smith Rowe could fix such issues as seen yesterday, where the £2.43m-rated youngster covered across the entire width of the field rather than remaining in central areas.

From his ability to produce quality in the final third to his movement and energy, Smith Rowe has the chance to secure a long-term place in the starting line-up. The quality hasn’t been great up until now and that could work in the Englishman’s favour.

In other news, Arteta has confirmed that one star will return to training today.