Kieran Tierney has been ruled out of Arsenal’s clash with Leeds United as the Scottish defender continues to sit on the sideline with a strain to his right lower leg.

The former Celtic man has been out of action since the encounter against Newcastle United back during the middle of January.

Initially, the problem wasn’t thought to be a big one, however, the left-back has now missed the last five fixtures across all competitions in a worrying sequence of events.

Who should play left-back vs Leeds? 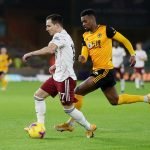 I’ve banged on about this for a while now, however, with a tough run of games just over the hill, I think it’s best to remind everyone Cedric Soares cannot continue to play left-back.

I’m all for watching the Portuguese defender play at right-back and maybe even ahead of Hector Bellerin given how well he’s performed thus far in his Arsenal career, but, the fact of the matter is, you need a left-footer on the left.

The last few games against Manchester United, Wolverhampton Wanderers and Aston Villa have shown that the former Southampton man isn’t up to the task in replacing Tierney.

His inability to use his weaker left foot means he has to continually come back on to his right when he receives possession, slowing down attacks. And when you mix that with his lack of end product in the final third, you get a player that isn’t even half as a good as Bukayo Saka, who also has the potential to play in that position.

The comparison in his heat maps during the clashes with Newcastle United and the Villians show just how ineffective he’s proving at left-back. Whilst the Portugal international used his endless energy to get up and down the pitch against Steve Bruce’s men, and register an assist, he covered far less grass against Dean Smith’s side in a more cautious display.