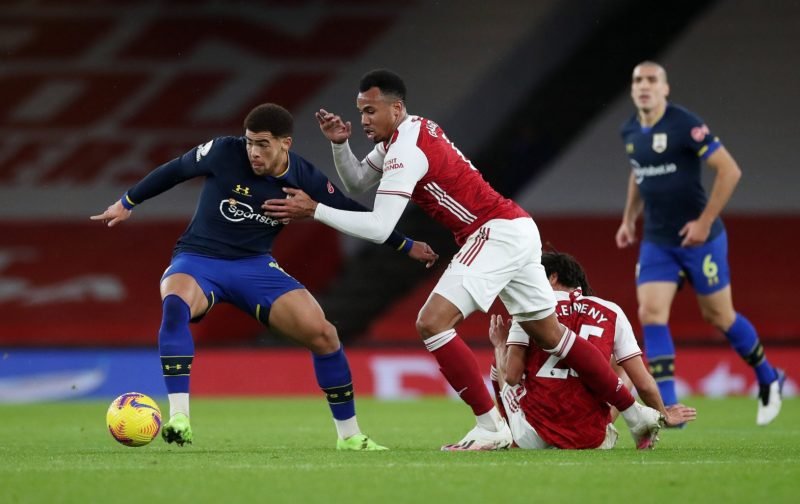 Red cards. The bane of Arsenal’s existence at this moment in time.

It seems keeping 11 men on the pitch is proving difficult for a Gunners side who extended their winless run in the Premier League to six games after drawing 1-1 with Southampton.

And once again, the boys in red shot themselves in the foot with Gabriel Magalhaes picking up two stupid yellow cards in the space of about four second-half minutes as Mikel Arteta’s men looked to win their first league game in five.

The first was the stupidest of them as the Brazilian kicked the ball away having committed a foul on the halfway line. Gabriel then made the mistake of getting too tight to Arsenal old boy Theo Walcott for his second booking.

What proved even more baffling than his actions was the former Lille man’s facial expression of surprise when he received his marching orders from referee Paul Tierney. He looked kinda surprised that pulling back an attacking player, who’s bearing down on goal was an illegal offence.

The attitude of the current squad stinks, and whilst I have voiced my opposition to some of Arteta’s tactics this season, he can do nothing about the stupidity which is pouring through this team.

First Granit Xhaka on Sunday, and now the summer signing. What more can you do as a manager? You’ve given your half-time team talk, the side have scored an equaliser with more than half-an-hour left in the game and your centre-back picks up two of the most needless cautions ever.

Whilst Arsenal didn’t start the game well enough, they were on course to fetch all three points in the second half. Gabriel’s stupidity is just as bad as Xhaka’s on Sunday even though it was the same show of petulance.