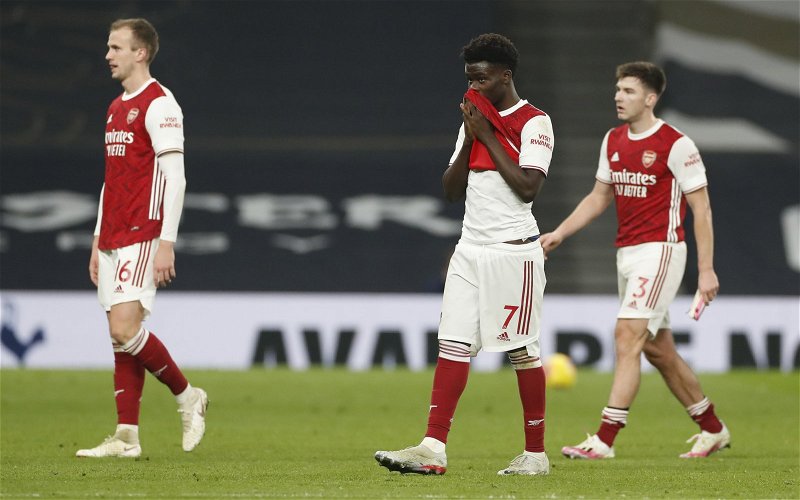 Gary Neville has hit out at Arsenal’s forward, accusing some of the stars of forming a ‘little mafia’ after the side’s 3-0 drubbing against Liverpool.

The Gunners were swept aside by Jurgen Klopp’s men, however, had just three shots on goal, two on target and produced an xG of just 0.12, the third-lowest any side have conjured up all season long.

Speaking on Sky Sports, the former Manchester United defender claimed some of the players seemed to be ‘disconnected’ from manager Mikel Arteta.

“The effort from that front six… They were a joke. The lack of energy. All the way through the first half I was getting more uncomfortable. Mikel Arteta, I think he would have been shocked by the lack of application.”

It seems strange to be accusing professional football players of failing to do their duty to the best of their ability, but, during the encounter, something strange was going on.

The Gunners managed to conjure up just 93 passes in Liverpool’s defensive third as the players failed to even lay a glove on the Merseysiders.

As a matter of fact, the centre-back pairing of Nat Phillips and Ozan Kabak had barely anything to do and given how poor the duo have performed at Anfield, it seems strange an experienced forward line of Pierre-Emerick Aubameyang, Alexandre Lacazette and Nicolas Pepe barely tested the duo.

The Turkish defender made no tackles, clearances, interceptions and blocked zero shots before being substituted on the 81st miunute in what is probably his easiest game for the Reds.

You can accept failure, however, the moment players fail to apply effort to their performances, things begin to get worrying. The lack of application last weekend is a stark reminder to the Spaniard that an overhaul is needed this summer.

In other news, Gael Clichy has labelled Arsenal as a ‘good fit’ for this departing forward.