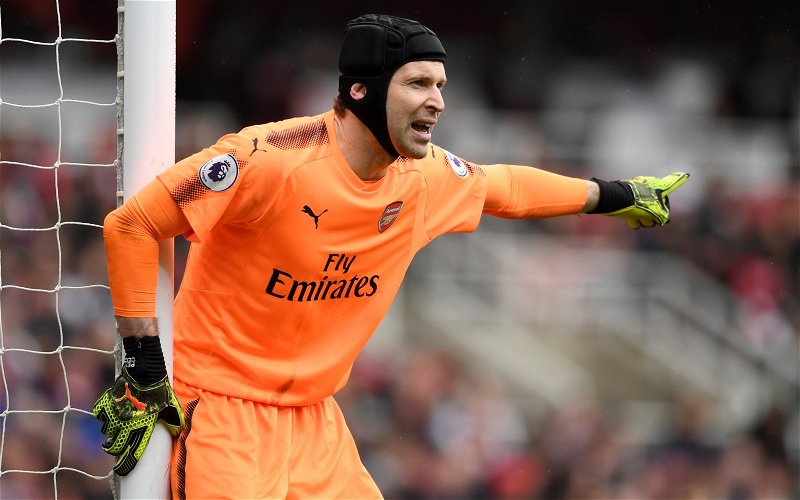 Following a 4-1 first-leg advantage, Arsenal booked their place last night in the semi-finals of the Europa League thanks to two second half goals from Danny Welbeck and Aaron Ramsey.

Going into the tie in Moscow with such an advantage it was always set to be a potential banana-skin for Arsene Wenger’s side and CSKA didn’t disappoint as they took a 2-0 lead with 50 minutes played in the game to almost eliminate the advantage built up at the Emirates.

Thankfully for the season of 2017/18 and fan tempers the two late goals coming inside of the last 15 minutes tied the game up at 2-2 and ensured progression with a 6-3 aggregate score.

Speaking to the Official Site as he met with the media post game, Cech explained that although a big first-leg advantage should obviously be a benefit, if you start slow as we did in the game, the team with nothing to play for always gets a lift.

Cech conceded the end of the first half saw Arsenal pinned back but he explained that was because the hosts had ‘motivation and hope’ so we just had to see that period out and ensure they didn’t score again. Sadly though they did five minutes into the second half restart and we really needed to dig deep then to make sure the tie didn’t get away from us.

He did nod to the disallowed goal which he knew would’ve changed things, but ultimately our determination paid off as Welbeck found the back of the net and he felt at that point we wrestled control of the game back.

Specifically on the subject of a first leg lead.

“There is only one team with something to lose and that is the one that is in a position where everyone says, ‘if you lose from there then it is absolutely crazy’. That is what happened to Barcelona, it almost happened to Real Madrid and today we had to make sure that it didn’t happen to us. At 2-0 the game can go either way and you have to make sure you are strong in your mind and you don’t panic. We didn’t panic and we did well in that period. We calmed down and found a way to score goals, and the first was important.”

Three games to go now and despite the quality of the sides left in the competition fans will be hoping that Arsenal can now shake their inconsistent ways this year and gun for the trophy as it would certainly improve perspective as we go into next season.

The question then is, will Wenger still be at the club after another largely disappointing year?

In his last 8️⃣ games for us, @aaronramsey has…

Despite the sense of his words, Cech hardly came out of last night’s affair without criticism.

Yeah, he only gifted them two easy second chances. You have mental issues too if you think that’s good goalkeeping.

He was awful for both goals….

U made us panic petr

Right time for ospina to come back as the cup goalie.

Woo, not good for the heart! But we rode the storm and are in the semi finals!!!! We have to improve at the back though guys. ⚽️