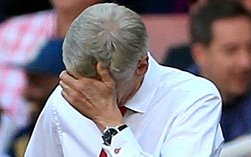 Following today’s clash between Arsenal and Manchester City, here are the instant reactions from both managers.

Arsenal hosted Manchester City at the Emirates Stadium for a 7.45pm kick off on Thursday March 1, with the visitors taking a back to back comfortable three nil victory.

It doesn’t rain for Arsene Wenger anymore, it pours – just as the anger does from the fans at the sense of growing stagnation at the club and whilst the visitors were cheering, the home crowd – containing a number of noticeable empty seats even given the weather – didn’t waste opportunities to boo.

Pierre-Emerick Aubameyang’s penalty miss merely seemed to sum things up for the club this season.

‘I knew the first half would be difficult for us after Sunday. We needed at least to come in level at half-time but City took advantage of our lack of confidence. The team put a huge effort in but they`re going through a different period and their quality made it a difficult game for us. The goals were preventable. I don`t think we can take away from the individual quality of the goals but it was soft defending on our side. After half-time we needed the penalty to go in to have a slight change to come back so that was a blow to us.’

‘It was tough but that`s explainable by the fact of what happened on Sunday and the consequences of the hype about our performance. It hits you. The players put in a huge effort today but unfortunately we had some weak defending. We focus on performances and when the pressure is on like this you have to show that strong organisation and unite, not divide. You have to stay together, focus and work even harder to get the confidence back. You don`t expect fans to be euphoric after losing 3-0. We have to earn the fans by the quality of our performance. It has to come from us.’

‘It`s so difficult to win two games in a row against a team like Arsenal, and we did it in tough conditions. The first five minutes and then the first 15-20 minutes of the second half we were not so good, but it was so important to win again and make another step forward. We want to be champions and every game we win we go nearer. They were all nice goals and Ederson was outstanding, saving the penalty, because the game was not won. Arsenal can create chances from nothing in 10 or 15 minutes and the way we started the second half was not good but it`s difficult to stay focused after winning a trophy four days ago. We created enough chances to score. I think it was three shots to score three. They arrived at the byline one or two times so Arsenal had chances but we did our job. That was important because we have tough fixtures coming up, Chelsea, Everton, United and Tottenahm. It was important to keep 16 points in front and the goal difference.’

‘Mentally we were strong. We were clinical. We scored three outstanding goals. After that it was not easy – the first 15 minutes of the second half we were poor. Still, it’s an amazing result for us. We are out of the FA Cup and we won the League Cup. Now it’s just two competitions and you fight for one of them for 10 months. These are the last steps to be champions, you keep going until the end. We have to win five games. We don’t think too much. Now we play Chelsea. Hopefully we have the desire to win, to be the best team in England. We forget that we are tired.’