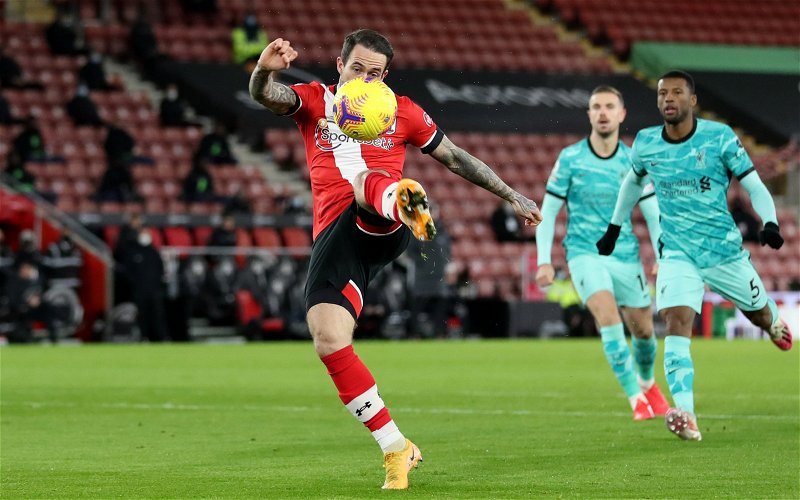 Gabby Agbonlahor has backed Danny Ings to join Arsenal over Tottenham Hotspur, claiming the England international would be a back-up choice at the Gunners’ arch-rivals.

News emerged on Tuesday that the £18m-rated Southampton striker is holding off on signing a new contract with the St Mary’s Stadium outfit and wants to join a Champions League side.

Speaking on talkSPORT, the former Aston Villa forward has also said that he thinks some Saints fans must believe they can finish ahead of Mikel Arteta’s men this year.

Agbonlahor said: “Southampton is a club where he feels at home. He’s playing football and getting into England squads. Does he want to move now and be second choice to Harry Kane? That could cost him a place in the Euros. I would stay where I am and try to come to an agreement (over a new contract) with Southampton.”

“(Ings would) suit Arsenal at the moment. Lacazette has got into some decent form but put Ings in that team and he would definitely score goals. But Southampton fans will argue they could finish above Arsenal this season.”(via talkSPORT 20 January, 9 am)

Signing a new number nine has proven a challenge for Spurs in recent years. How do you find someone willing to play number two to one of the best strikers in world football?

That may well open the door for the Emirates Stadium giants, who have had mass inconsistency from their attacking options this season. Alexandre Lacazette has blown hot and cold all season long, starting the season on fire before hitting  rough patch. He’s now in red-hot form, but, at 29-years-old and with just 18 months on his current deal, selling him in the summer is a real option.

Meanwhile, Eddie Nketiah’s development hasn’t gone as planned for the Reds with the youngster failing to grasp Arteta’s style of play. His finishing has never been under question, however, the England under-21 international doesn’t prove nearly as efficient in his all-round game as his French counterpart.

And whilst Pierre-Emerick Aubameyang is returning to form at the right time, he may well be deployed on the left-wing for the foreseeable future.

There’s a real need for a forward in the summer, and Ings could well be the best option on the market. He has performed miracles under the management of Ralph Hasenhuttl with his game across all areas improving massively since his time at Liverpool.

The centre-forward’s position has proven to be an issue this season. A better option is required in the summer and analysing Ings’ suitability has led me to believe he could be a shrewd option in the summer window, should the price be right.

In other news, figures at the club are inconclusive over what should happen to the Arsenal ace.