The Man Is Classy Until The End 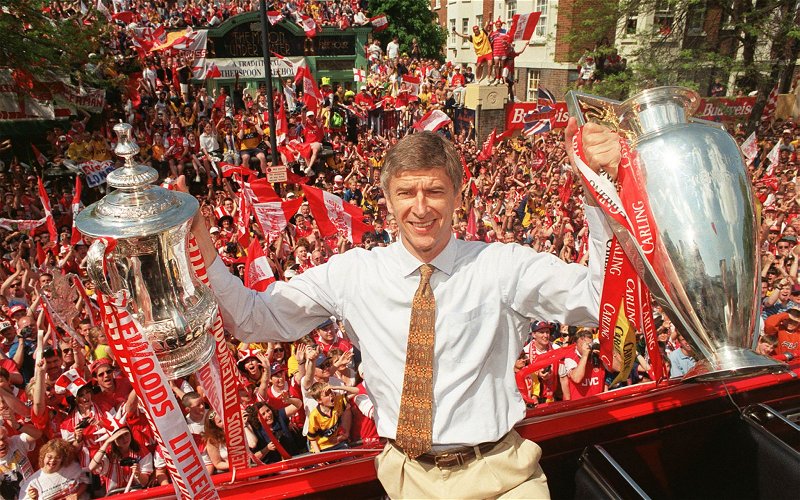 The announcement earlier this morning that Arsene Wenger would be leaving Arsenal at the end of the season has certainly sent social media into meltdown.

A 22-year reign, three Premier League titles and seven FA Cups later, no doubt Wenger himself would’ve hoped his time at the club would’ve seen greater silverware but there are a number of other achievements that he can be credited for even if there wasn’t a trophy at the end of them.

It’s probably fair to say he’s loved and hated around football as the club became so pleasing on the eye and entertaining it attracted support from opposition fans (even if they kept it quiet), yet Wenger will also be remembered for not finding his own pocket or being able to see anything at key moments in matches when it came to the officials.

With such a long span of time in charge and barren periods in terms of success where we were in the upper reaches of the Premier League table, but not really mounting a threat on the title, the last few seasons, in particular, have seen our own fanbase become split.

There are those who have nothing but thanks and respect for Wenger’s achievements and the moments he’s given us, and those who believe a change to freshen the club up and give us a new direction in search of silverware is long overdue.

The latter now have their desire and over the summer we’ll see if the grass is in fact greener.

Apart from a few expected jokes on social media – namely those calling on Arsenal to now announce Wenger as Wenger’s replacement, the reaction has been as classy as our gaffer.

"To all the Arsenal lovers, take care of the values of the club,
My love and support forever."

Gentleman until the very end.

End of an Era.
Sad Day for Football. #AurevoirArsene pic.twitter.com/9FBj5tHXEi

Arsenal have won 45 trophies in their history

Arsene wenger has won 17 of those in 22 years

Arsenal have won 7 titles in the last 70 years

3 of those in the last 22 under Arsene Wenger
He deserves a great send off , he took you to another level #Wenger #Arsenal

All the glorious memories, all the joy that I have as an Arsenal fan is because of you Arsene! #MerciArsene #OneArseneWenger pic.twitter.com/10yRAnVOkS

On the verge of tears, why did it have to end like this?

We are crying, we have been fans for 10, 20, 30, 40 years?
Now imagine how a man who MANAGED it for 21+ years would be feeling at this
He left his everything for us
And there are/were some 'FANS' who for their video clicks abused and killed this man
NEVER FORGIVEN #AFTV

I will be eternally grateful for what he has done for The Arsenal and will always respect and admire him for his principles, class and intellect. #MerciArsène

The only manager in the whole universe who earned & hold a @premierleague golden trophy. #MerciArsene #OneArseneWenger #ThankYouArśene #AFC #COYG pic.twitter.com/0FvkMTxgWQ