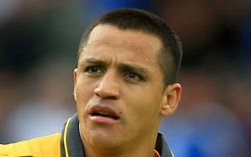 The performances by Alexis Sanchez for Arsenal during their festive fixtures was enough to earn them a place in the side alongside the other, in the opinion of the former Spurs striker anyway, most impressive performers in the topflight over the last few matchdays.

I think we’ll already know ourselves, and not just based on the latest performance, why Crooks, we’ll also not argue with it, selected Sanchez as part of his team but explaining his choice he told the BBC.

‘It was the amazing double act of Mesut Ozil and Sanchez who helped salvage a point in the 3-3 extravaganza against a Liverpool side that once again only seem to have a forward gear. Both men were at it again two days later, this time against a Crystal Palace team who did have gears that went into reverse as well as forward, but their defence couldn’t make the transition from one to the other quick enough to stop Sanchez or Ozil from exploiting the gaps. If Spurs are a one-man team and can’t cope without Harry Kane, then Arsenal must be a two-man team because the Gunners are very ordinary without Sanchez and Ozil. The German was missing against West Brom leaving Sanchez holding the fort. Sanchez did his best and would have nicked all the points had it not been for a dubious penalty given by Mike Dean. This left Wenger fuming about the penalty decision and incandescent about the match scheduling. I agree about the match scheduling by the way, but haven’t the owners of football clubs, managers and players for that matter agreed this vicariously by taking television’s money. I can’t imagine what Wenger and Sanchez are paid but it’s all down to TV income isn’t it? Meanwhile, Sanchez has all but left for Manchester City and who can blame him. The Chilean has been absolutely brilliant and a model professional for Arsenal throughout the festive period. He hasn’t downed tools like others I could mention but has conducted himself in the best possible manner under the circumstances.’

It’s always good to see the club represented in this way, so well played to Sanchez for his recognition.