Mkhitaryan Takes No 7 But Not For Europe 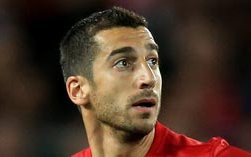 Arsenal have confirmed that new signing Henrikh Mkhitaryan will take Alexis Sanchez’s vacated number 7 shirt, but regulations stop him from wearing that number in the Europa League.

Despite the shirt number having been vacated following Sanchez’s switch to Old Trafford and Manchester United, UEFA rules state that Mkhitaryan must wear an unused shirt number because 7 was worn by Sanchez in the group stage victory over Cologne back in September.

For fans looking to wear our new signings number, 7 is the choice for the Premier League but Arsenal will confirm an alternative number for European competition.

I guess taking No 7 is no great surprise for many following his arrival, but that seems a ridiculous rule by UEFA and I’m at least failing to see why somebody would’ve even thought of that.