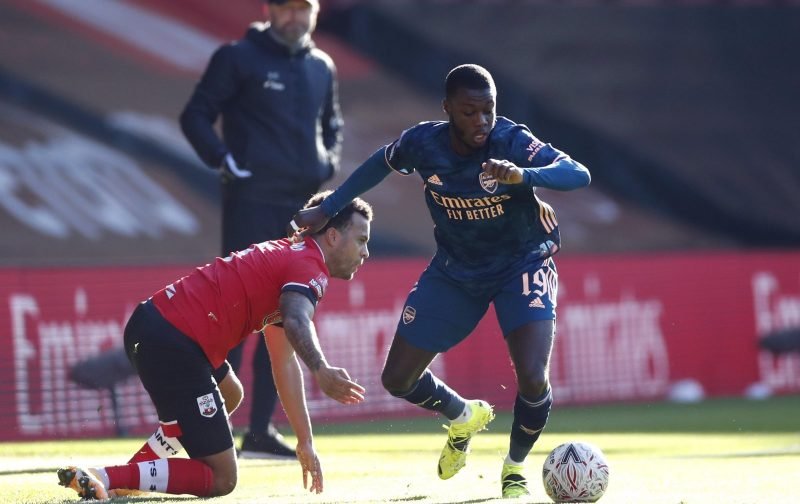 Alan Smith has taken aim at Nicolas Pepe after the Ivorian’s performance against Southampton in the FA Cup fourth-round tie on Saturday.

Pepe proved underwhelming in last weekend’s encounter against the Saints as he struggled during the opening period of the cup tie.

Speaking on Stadium Astro, the former Highbury ace claimed that the club could be set to make a huge loss on the £72m signing from Lille.

Smith said: “He’s one of those players who can produce a bit of magic, cut inside and find the top corner. But on other occasions, his football intelligence looks short. It’s not as if he had been tearing up trees for a long period in France. You can throw the transfer fee at him but that’s not his fault.”

“The fact remains he’s a big signing and they spent a lot of money on him. If they were to sell him now they would make a huge loss, so that’s another problem.” (via Stadium Astro)

One of the biggest problems with Pepe is his inability to think clearly in certain situations. There are times where the player fails to let go of the ball and find a teammate. However, I feel the recent criticism of the Ivory Coast international is going over the top, given how little opportunities he has been afforded this season.

Out of the 19 Premier League games, the record signing has started just four times. It proves incredibly difficult to make an impression when you aren’t affording the regular game time. If you compare that to the likes of Willian, who has started the majority of the league games this season, yet has still performed underwhelmingly.

When you struggle yourself, the last thing you need is to play amongst teammates who are also low on confidence. Featuring alongside the likes of the former Chelsea man and Gabriel Martinelli, who has just returned from injury, will never do much to assist Pepe.

There needs to be perspective when criticising a player. Pepe has been nowhere near proving he’s a £72m man, however, there are far too many factors which have hampered his progress in north London.

In other news, Kevin Campbell has urged Arsenal to bin this ace for a France youth international.