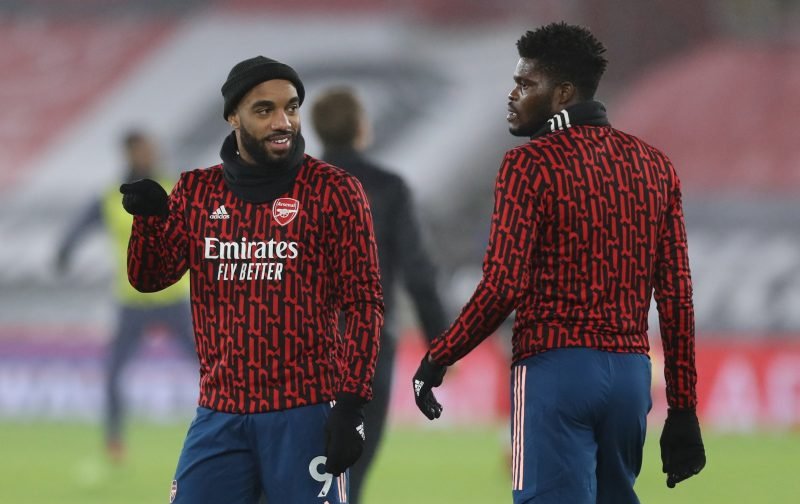 The comments come after the Spanish boss left the central striker on the bench for the Gunners’ 4-2 thrashing of Leeds United last weekend.

Speaking to talkSPORT, the Old Trafford legend professed was disappointed for the France international, who may feel like he could’ve scored a hat-trick after watching Pierre-Emerick Aubameyang notch up his first against the Whites’.

Cole said: “Look at Lacazette and I’m disappointed for him because I don’t think Arteta believes in him. He’s looking at Aubameyang coming back in after two games on the bench, gets himself a hat-trick… he’ll be saying to himself, ‘that could have been me.”

Whilst I can’t speculate what Arteta thinks about the 29-year-old, it does seem strange that Lacazette would sit on the bench after his performances at the start of the year. The fact Aubameyang came straight back into the line up after returning from his personal issues is quite telling.

And in all honesty, you can’t blame the manager for entrusting his faith in the club captain. After all, the African ace is by far the best finisher at the club and with the outfit having invested a lot of money in him, it would make sense to please the star more.

With just a year left on his contract at the end of the season, the next few months could be crucial for the former Lyon man if he harbours any serious hope of continuing his career in north London. However, with the likes of Juventus and Atletico Madrid having retained an interest last summer, a move away could suit both parties.

Arsenal would reap the financial rewards, whilst Lacazette would be sure to gain more regular starts. However, having seen him perform so well recently, I agree with Cole in that it was disappointing to see the figure on the bench for the win over Marcelo Bielsa’s side.

In other news, Kevin Campbell has backed the club to release this player at the end of the campaign.