We’re Through, There’s Not A Lot To Add 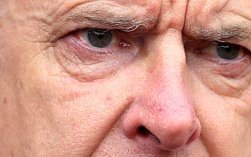 A disappointed Arsene Wenger has admitted that Arsenal weren’t at the races in the first half of the game yesterday evening against Ostersunds.

Hosting Graham Potters side at the Emirates Stadium for the game, Arsenal were looking for a boost going into Sunday’s League Cup Final against Manchester City but that was world’s away from what the side actually ended up with.

A Calum Chambers own goal with a further effort from Sema gave them the two goal advantage in the opening 45 minutes, but Sead Kolasinac did make it a one goal game two minutes after the restart but that was how the scoring ended.

We progress through to the Final 16 stage of the Europa League though given the size of the first leg win.

Speaking to the Official Site as he met with the media to discuss the game, a frustrated Wenger spoke about the first half and when asked to reflect on the defeat and the pleasure of going through to the next round, he explained.

Wenger could’ve ended the press conference right there to be fair.

‘We were not at the races in the first half. I think in the second half it was much better and we should have scored a few goals. Our energy was higher, our domination was consistent and we were in control in the second half. In the first half we were in trouble and in danger because we were complacent, not focused and were open every time we lost the ball. We had no ideas with the ball and that`s why we were in trouble. We responded very well because we did the job to qualify, but that`s what we have to take from the night and that`s all.’

Having mentioned the word complacent, Wenger was asked if the players thought the tie was over ahead of kick off and whether that was the problem.

‘It`s difficult to say. We prepared properly and in a serious way, but you have external circumstances such as the fact we won 3-0, the fact that we have another big game on Sunday, the fact that people subconsciously think you just have to turn up to win the game. Football doesn`t work like that. We played against a good side and it`s what you see in the FA Cup. Against all teams, you can be in trouble every time you`re not 100 per cent focused.’

Of course, that led to a reference back to the FA Cup defeat to Nottingham Forest earlier in the season and whether it was becoming a trend for the side.

‘You have seen upsets like that many times in the FA Cup. Against Nottingham Forest, we played a similar team and we were not at the level that was demanded.’

Maybe that should tell Wenger something about the ‘team’ he keeps selecting?

Someone had to ask what Manchester City would make of a showing like that.

Turning back to the match, Wenger had praise for the opposition once again.

‘I felt they played very well. They are a good side. If you look at their results in the Europa League since the start of the season, they have had very good results. You see that tonight and it`s not by coincidence. How many foreign players are in their team? I don`t know, but it`s an international team as well with top-quality players.’

He also conceded the competition would now get more difficult at the next stage.

‘Yes, of course it will be more difficult. We have to wait to find out who we get tomorrow, but of course the closer you get the more difficult it will be. Ostersunds were a good candidate. They don`t have a glamorous name, maybe because they have no real history in Europe, but technically and collectively they are a good side.’