‘We are a little bit short’: Mikel Arteta admits worries over gaping hole in side’s defence

Mikel Arteta has claimed that Arsenal do need a back-up left-back after Sead Kolasinac left the club on a loan deal to Schalke earlier this month.

The German-born ace’s move to the Bundesliga’s basement outfit means that Kieran Tierney is the side’s only out-and-out left-back.

Speaking ahead of this weekend’s clash with Southampton, the Spaniard claimed that the club are open to signing a new player if the opportunity arises.

Arteta said: “With the departure of Kola, we are a little bit short with left-footed full-backs at the moment. We know we can use Ainsley there, we can use Bukayo there and we can use Cedric – who has played in that position – so we have some options. A natural option to Kieran? Obviously, we don’t. But we can adapt. That means that the option is open and we will look to see what is available.” (via Arsenal) 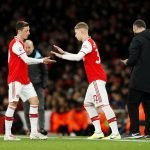 There does seem to be quite a shortage on the left side of defence, an issue which has already reared its ugly head in recent weeks. With the Scotsman out for the clash with Crystal Palace, Ainsley Maitland-Niles was tasked with filling in and it’s safe to say he wasn’t nearly as effective as the £25m man.

Maitland-Niles gave possession away a staggering 13 times and failed to deliver a single successful cross into the area, proving far from suitable compared to Tierney, who scored and assisted in the 4-0 win over West Bromwich Albion.

Bukayo Saka has filled in on the left numerous times during his short career, however, with his successes further afield, it would prove ill-advised to pull him back to a more defensive position.

The difference in impact made by the two men is quite amazing and shows that should further injuries occur to the former Celtic man, Arsenal could well be in a spot of bother. Palace was just a warning for the former Manchester City coach, and if he heeded it, a replacement would be signed this month.

In other news, Arsenal have revealed the latest team news ahead of the clash with Southampton.