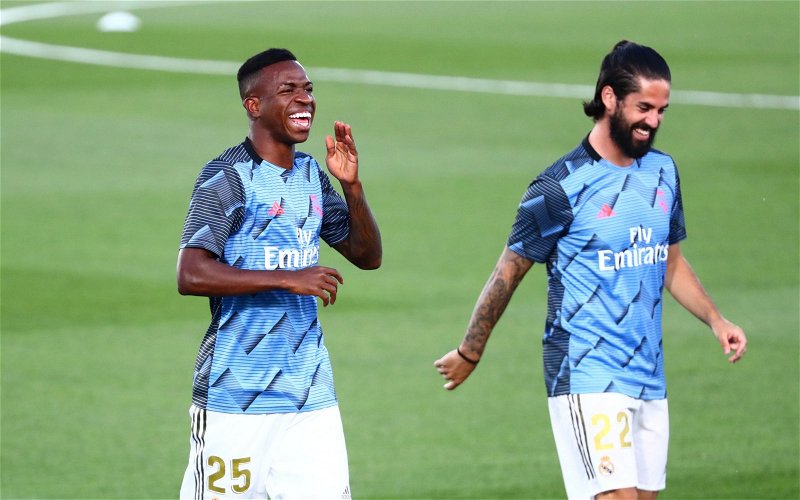 Real Madrid are ‘hoping’ Arsenal enter the race for Isco, according to the latest reports from El Confidencial.

The Spaniard’s contract at the club ends in July 2022, and it is being claimed by the Spanish publication that Madrid are actively looking to sell the midfielder.

However, Arsenal aren’t the only Premier League club looking at the experienced ace with Everton also said to be interested in making a move for Isco.

A move for the player would be a pretty handy transfer from an Arsenal point-of-view with the north London giants struggling massively in the final third. The last two home Premier League encounters showed us that the Gunners are in desperate need of some quality in attacking areas.

Against Leicester City and Aston Villa, Mikel Arteta’s men combined for just six shots on target as many as the side managed in their opening day win over Fulham. This struggle is further highlighted by a goalscoring stat which says the side have failed to score from open play in over six hours in the top flight.

It’s quite sensational that the Reds have gone so long without a goal and it shows just how poor the decision to leave out Mesut Ozil from the squad was. Isco has proven to be a menace in terms of attacking output, having contributed over 100 goals in his career with the Spanish giants.

Any potential signing would bring a plethora of experience to the Emirates Stadium with the £123k-p/w attacking midfielder possessing a monstrous haul of trophies. Since joining the European giants back in 2013, Isco has won a staggering 16 major honours, including four Champions League trophies

From quality to experience, Isco possesses all the necessary qualities to be a hit in north London. And with Real Madrid looking for a relatively modest transfer fee, he would be an astute purchase going forward.

In other news, this Arsenal player travelled abroad against club policy during the international break.