Mikel Arteta is keeping tabs on Eric Garcia’s situation at Manchester City ahead of a potential transfer next year, according to The Sun.

The Spaniard has reportedly turned down a contract offer from the Citizens with a view to returning to Barcelona.

However, it’s thought the Catalan outfit don’t have the cash to buy the defender having failed to raise the £13.5m required to sign Garcia in the summer. 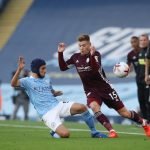 The centre-half is available on a free transfer next summer with his contract expiring in June. With the likes of David Luiz, Shkodran Mustafi and Sokratis all tipped to leave the following the expiration of their contracts next year, the signing of a new player is crucial.

However, is signing Garcia the fix for Arsenal’s problems next summer? I don’t think signing a 19-year-old is the correct decision especially with three very experienced players in Luiz, Sokratis and Mustafi departing.

His potential signature would leave him, William Saliba and Calum Chambers as the options at right centre-half. The Englishman himself is just 24-years-old, adding a 19-year-old to the current crop puts immense responsibility on his shoulders. And having just returned from a serious long-term injury that proves a shocking move.

You may look at his statistics and say: ‘he’s a great player’. But, you need to remember that, Pep Guardiola’s side dominate most of their games, you’re going to look good in a team that has the vast majority of possession and chances.

Is the 19-year-old on his way to becoming a great defender? Probably, but given the inexperience which already exists at the Emirates Stadium, signing the £18m-rated ace would prove inexperience.

In other news. Edu is preparing for the potential exit of an Arsenal figure.