Arsenal are yet to officially approach Norwich City for midfielder Emiliano Buendia, according to football.london’s Chris Wheatley.

Manager Mikel Arteta is thought to be an admirer of the player, who enjoyed a standout season in the Premier League despite the Canaries’ relegation.

A source close to the player has revealed that he is focused on winning promotion with the Norfolk outfit, however, has refused to rule out a move if the Championship outfit allow one.

Age and his ability make the Argentine a brilliant acquisition in the January transfer window. The winter month is usually a difficult time in terms of buying players, however, the South American proves a great opportunity.

Should Arsenal buy Buendia in January? 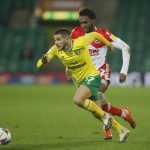 His quality is in no doubt as well with the 23-year-old proving to be a sensational figure for Daniel Farke’s men in the top-flight despite their demise last campaign. The number 10 averaged 2.3 key passes and 2.8 dribbles per game in the top tier.

His eye for a pass makes him a suitable option to replace Mesut Ozil, who similarly had ability to produce a killer pass. In December 2019, the £11.7m-rated ace created a league-record 29 chances in the league, showing how crucial he can prove in the final third.

However, the playmaker also has the killer instinct in front of goal, scoring two goals and assisted a further four in the Championship this year.

The Gunners’ lack of end-product in the final third has been worrying this season. To score just 10 goals in 10 league games is absymal for a so-called ‘big six’ club, making the acquisition of Buendia a necessity in the winter window.

In other news, Paul Ince has claimed he would choose this young gun over Willian.