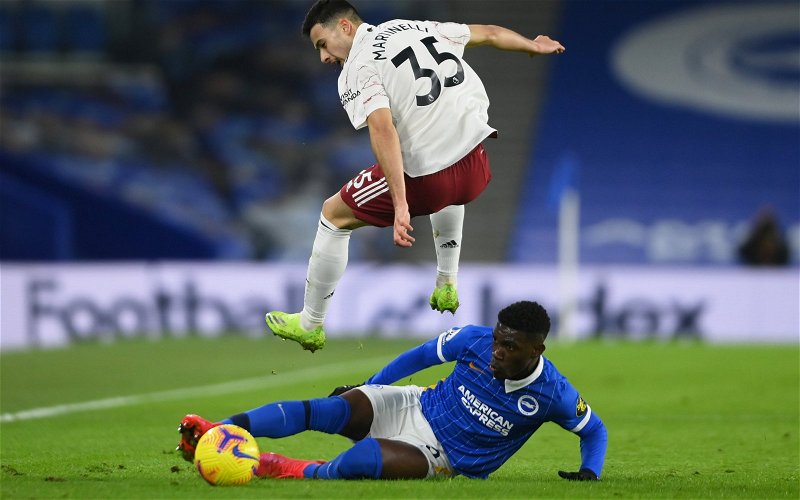 Arsenal retain a strong long-term interest in Brighton and Hove Albion’s Tariq Lamptey despite the youngster having signed a new contract, according to The Mirror.

The Englishman signed a new long-term deal back at the start of the year and has progressed considerably at the club since moving from Chelsea last year.

It comes after Hector Bellerin was linked with a move to Paris Saint Germain with the full-back having reportedly asked to leave the club for the French champions.

As I’ve mentioned before, the Spaniard has been below par for far too long and needs replacing at the end of the season. If the Gunners can attain a great fee for him whilst getting a good replacement then all the better.

In the past you would’ve ruled Arsenal out of the race to sign a talented player like the 20-year-old, however, situations have changed over the last few seasons. The Gunners’ pursuit and success in signing Nicolas Pepe and Thomas Partey for big-money shows the north London outfit are able to flex their financial muscles in the market.

However, with the class of teams being mentioned in the Lamptey discussion, do the Reds have a chance at signing the full-back?

The answer is yes. Whilst the youngster will obviously want to achieve bigger and better things than Arsenal can offer, there is a feeling he’d play more due to the lack of competition. Bayern Munich and Atletico Madrid have been touted as clubs interested in the starlet, however, with the duo possessing competitive options in the position, regular game time is far from a certainty.

And with Mikel Arteta showing off his unrelenting skills in improving young talents, who has been labelled ‘selfless’, the pair of them would be a match made in heaven.

In other news, Arteta wants to swap this ace for a PSG forward.