Report: Arsenal in race with Chelsea to sign Serie A ace who only joined Italian side for £34m last summer 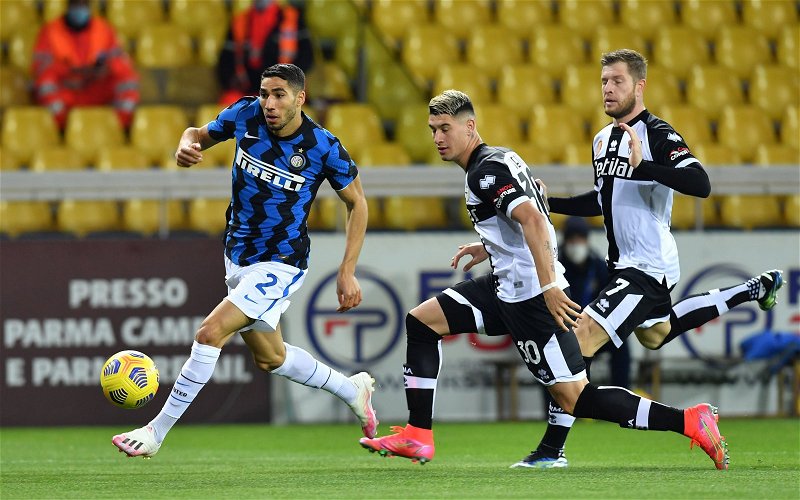 Arsenal and Chelsea are in a race to sign Internazionale right-back Achraf Hakimi in the summer transfer window, according to The Telegraph.

Mikel Arteta’s side are in the market for a right-back at the end of the season with Hector Bellerin attracting interest from clubs across Europe.

The former Real Madrid man only joined the Serie A giants last summer after making his loan move permanent in a deal worth £34m.

If you haven’t watched Arsenal, you can count yourself as a lucky individual given how awful the side have been this season. However, the one area of the pitch which has proven more shocking than most is the right side of the defence.

Bellerin has endured what can only be described as a rollercoaster of a campaign with performances riddled in inconsistencies. Reports emerged a few weeks ago that Paris Saint Germain are interested in making a move for the 25-year-old, a move that would leave the Reds with a gaping hole to fill.

The club have already been linked with youngster Tariq Lamptey, who is thought to be a target, however, in the Moroccan, they may have found the perfect fit for the potentially departing Spaniard.

Hakimi’s mix of attack and defence makes him a great player for Mikel Arteta, who is desperately searching for the perfect full-back to match Kieran Tierney on the opposite flank.

The 22-year-old has scored six goals and assisted a further six across all competition with Antonio Conte’s side sitting top of the Italian top-flight. He proves just as fruitful at the back, averaging the fifth-most tackles whilst having been dribbled past just 0.6 times per game for Inter.

Whilst Bellerin has been underperforming massively this year, you feel Tierney’s displays on the opposite side of the pitch has placed extra pressure on him. But, there still needs to be action taken as a result and the acquisition of Hakimi could be quite the signing.

In other news, Rio Ferdinand has made a strange comparison of the Arsenal first-team after Saturday’s draw with Burnley.