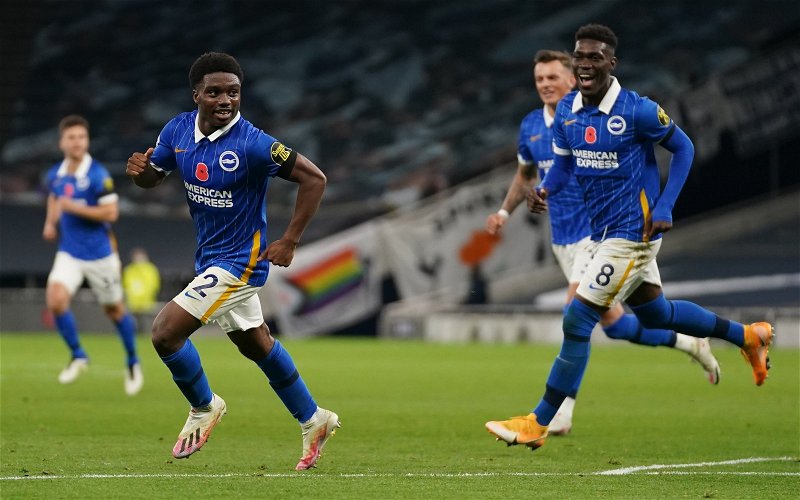 Arsenal target Tariq Lamptey doesn’t have a release clause in his Brighton and Hove Albion contract, according to The Sun.

The £16.2m-rated former Chelsea man only joined the Seasiders back in January of 2020, however, has already signed a new deal until the summer of 2025.

Journalist Tom Barclay has also revealed that star more than doubled his wages when he signed the new contract with the Premier League outfit.

The news will surely come as a blow for Mikel Arteta’s side, who according to reports last week are interested in making a move for the right-back. TalkSPORT claimed that the Gunners were targeting a move for the England youth international should Hector Bellerin leave the club for Barcelona.

Bellerin’s performance levels have been below-par to say the least and Lamptey would’ve been an ideal replacement as a result.

The youngster has been sensational during his year-long spell with Graham Potter’s men. For a defender, his output in the final third is quite staggering with Lamptey averaging the fourth-most dribbles out of Brighton’s team. He has also been fouled 2.5 per league game, proving a menace to opposition defences. In stark contrast, the Spain international’s attacking statistics don’t even come close to the 20-year-old.

The lack of a release clause may just price the north London side out of a transfer for the young ace. English players, especially young ones go for a lot of money in the transfer market as seen by the transfer valuation surrounding James Maddison, Jack Grealish and Jadon Sancho. With the Reds needing to sell before they are able to buy, it’s clear Arsenal don’t have the funds to afford the star.

In other news, Mikel Arteta has made this improvement a catalyst for his Arsenal reign.