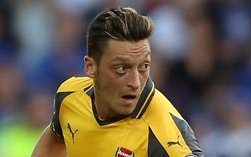 Mesut Ozil’s agent has revealed ‘positive’ contracts talks between his client and Arsenal.

With plenty of speculation over the last year about whether Ozil would agree a new deal, whether one in fact had been offered and sat on the table, it seems there has now been some progress in the matter.

Sky Sports were reporting yesterday evening that agent Dr Erkut Sogut had revealed that talks over a contract extension were ‘going in a positive way’.

With Ozil’s existing deal up at the end of this year, Ozil can talk to clubs outside of England next January and following his £42.5million arrival from Real Madrid back in September 2013, he now has well over a 100 games to his name with a return of over 30 goals.

Dr Sogut has said Ozil is certainly not against extending his stay in north London though.

‘Ozil wants to play another two to three years in the Premier League. Our contacts with Arsenal continue and are going in a positive way.’

Ozil hasn’t featured for Arsenal since the two nil victory over West Bromwich Albion back on September 25 following injury, and he missed out on Germany’s action this international break and it’s unclear if he’ll return for Watford this Sunday.