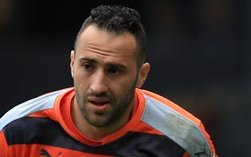 In the build up to Arsenal’s second leg Europa League clash with Ostersunds tonight, manager Arsene Wenger has confirmed that David Ospina remains our Cup keeper and will play this evening and Sunday in the League Cup Final.

Citing that he has two ‘world class goalkeepers’ in contention for the position between the sticks, Wenger insisted that the clear policy of who would play when remains in place unless injury or suspension forces a different decision.

Speaking to the Official Site as he met with the media on Wednesday, Wenger answered questions on Ospina starting both of our next matches with repeating affirmatives.

Asked if it was a tough decision to drop Petr Cech and go with Ospina, he agreed but pointed to the policy from the beginning.

‘It`s always a difficult decision but I think they are clear about that. Since the start of the season, it`s clear. He played in the whole competition. I have two world-class goalkeepers and I decided from the start on to have clarity in the games they play. I maintain that.’

With the first leg affair seeing Ospina save a penalty, Wenger used that as a point of keeping faith with him, even though fans often disagree on social media.

‘It gave us good news on the day, yes. First of all, for us it was important to keep a clean sheet in an away game. On top of that, we saved a penalty, so overall it was good.’

The confirmation will no doubt confirm the split in the fanbase at our approach to how our number one goalkeeper should be.