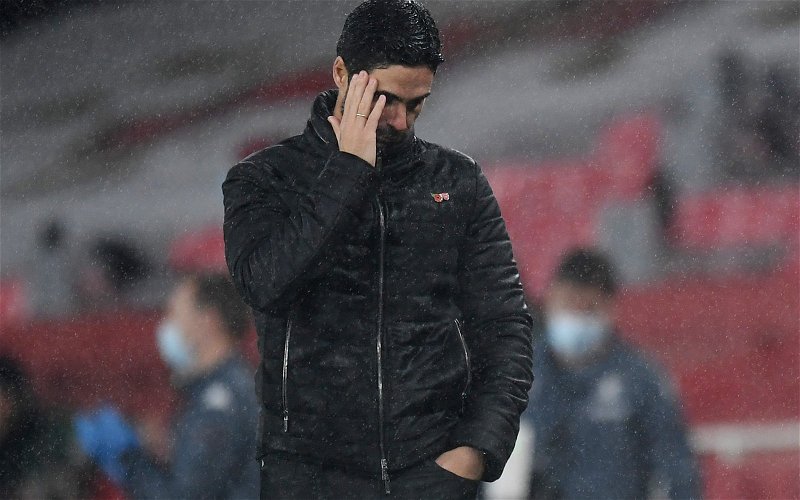 Let’s be honest, last night’s thrashing at the hands of Aston Villa is proving to be a bit of a reality check for most Arsenal fans.

Anyone who thought the Gunners had top four firmly in their sights after the victory at Old Trafford could well be biting their nails as Mikel Arteta’s men recorded their fourth defeat in eight Premier League games.

It has left the ‘million dollar’ coach (Sky Sports via Tribuna), under immense pressure despite there being over 30 fixtures left in the campaign.

Among many failures, the Gunners have failed to stamp their authority in most of their games this season.

Analysing their home games, the team haven’t been dominant in any of them with losses to Villa and Leicester City, whilst Sheffield United and West Ham were unlucky not to leave the Emirates Stadium with at least a point.

It’s looked even bleaker away from home, where their only convincing win has proven to be against Fulham, who sit near the relegation zone.

The Gunners did do well against Manchester United however, only managing to scrape through thanks to a second-half penalty, showing how much they’ve struggled in the final third.

Just what is going on with the Reds? How can a team, who possesses the likes of Pierre-Emerick Aubameyang, Alexandre Lacazette, Willian and Nicolas Pepe be struggling in attack? It’s a real head-scratcher.

Out of the other 19 teams in the league, only Wolves and the bottom four have scored fewer goals than Arteta’s men, who currently have just nine in eight fixtures. As a matter of fact, the club have had the sixth-least amount of shots in the division with even relegation-candidates Fulham having had more.

When you mix a lack of goals from open play with a lack of shots for your best goalscorer, it really does make for a cocktail of disastrous proportions. The Gabon international had no attempts on goal last night as the side slumped to defeat, and when your most potent finisher is failing to even have a shot, you know you’re in major trouble.

And then there’s the issue of line-ups. A few players like Lacazette and Willian have performed horrendously over the last few weeks, yet find themselves starting week in, week out in the top division.

Willian has completed just one take-on in his 310 league minutes, Meanwhile, Lacazette has shown with his misses against Leicester City and Villa that he couldn’t hit a barn door, let alone the back of the net.

Lack of goals from open play, no dominant victories and poor starting line-ups, Arteta really is under severe pressure heading into the remainder of the season.

There doesn’t seem to be a quick fix to all his problems, especially in attack where he left the club’s most creative player, Mesut Ozil, out of the 25-man Premier League squad.

Champions League football is a must for the former Manchester City assistant coach, who has failed so far this season.

Arsenal fans, do you think Arteta is under severe pressure? Let us know your thoughts!