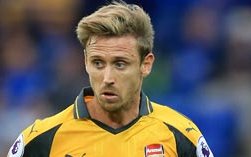 The performance by Nacho Monreal in the two nil victory over Brighton at the weekend at the Emirates Stadium was enough to earn them a place in the side alongside the other, in the opinion of the former Spurs striker anyway, most impressive performers in the topflight over the latest weekend.

I think we’ll already know ourselves, and not just based on the latest performance, why Crooks, we’ll also not argue with it, selected Monreal as part of his team but explaining his choice he told the BBC.

‘A player such as Nacho Monreal is not the sort of defender I naturally gravitate towards, but I feel compelled to select him. Performances from players such as former Gunners full-back Lauren used to thrill me, while Sol Campbell seemed to get better the bigger the occasion. Then there was William Gallas, who was amazing, and Ashley Cole who, for five years, was the best left-back in the world. These were defenders – some of whom were part of their ‘Invincibles’ side – I greatly admired. Now Monreal is not in this class, but whenever I see him play he does so as if his life depends on it. Monreal has survived at Arsenal while others have disappeared and the more I watch his performances, the more I understand why. The player’s commitment is quite extraordinary, manager Arsene Wenger trusts him implicitly, and so he should. Monreal’s goal against Brighton, in what was an otherwise poor game of football, was one of the few bright sparks. This fixture was enough to send me to sleep.’

It’s always good to see the club represented in this way, and well played to Monreal for his recognition, but the most important thing about the weekend was of course the win.