‘Massively under pressure’: Troy Deeny believes figure is in threat of leaving Arsenal 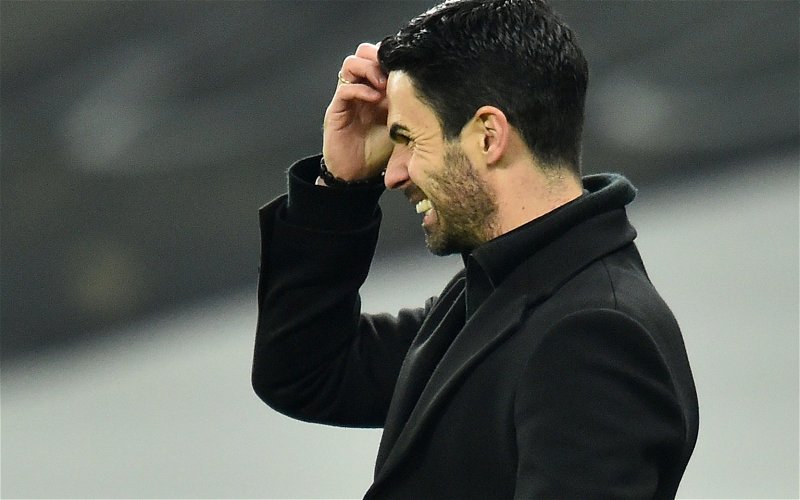 Arsenal have been tipped to sack Mikel Arteta by Watford forward Troy Deeney if they lose to Burnley this weekend.

The Gunners face the Clarets this Sunday, heading into the game after they lost the north London derby 2-0 to Tottenham Hotspur.

Appearing on talkSPORT, the forward claimed that the Spanish coach is under massive pressure ahead of the visit of Sean Dyche’s men.

Deeney said: “Arsenal are in trouble. I’m happy for them that they are at home, but if they were playing Burnley away this week I’d be very nervous for them. I think he [Arteta] has to come under criticism, ultimately because of where they are.”

“For me, and I’ll go out on a limb here, if they lose [to Burnley] he is massively under pressure. I’d be surprised, if they lose and the ones around them win, and they are looking more backwards than upwards, he would be under pressure to keep his job.” (via talkSPORT)

Whilst I can appreciate where Deeney is coming with regards to the amount of pressure Arteta is under, I don’t believe he’s in any threat of losing his job. The truth of the matter is the current Arsenal squad is the vision of two predecessors; Arsene Wenger and Unai Emery.

The only two players that have been signed under, Gabriel Magalhaes and Thomas Partey, have arguably been the two best players for the Gunners this season. It’s a show of how well Arteta has done to recruit talent to make a difference. And if Arsenal are serious about this rebuild, they’d allow Arteta to completely restructure the outfit before even dreaming about sacking him.

It’s a case of same thing, different day with the north Londoners and their squad. How many times in the last few years have you heard about how poor the squad is. Gary Neville labelled some players ‘uncoachable’ after Emery’s sacking, meanwhile, Graeme Souness called them a team of ‘son-in-laws’.

There are plenty more examples of pundits and experts calling out for mass change of the first-team at the Emirates Stadium, meaning Arteta should be afforded time to build his own squad. Sacking Arteta merely restarts the entire process again. A new manager will just be inheriting downed tools, and will need time then to build his vision.

In other news, Tim Sherwood has hit out at the signing of this former Ligue 1 ace after the emergence of a young gun.