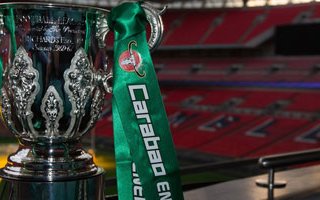 The draw for the Semi Final stage of the English Football League Cup took place a short time ago.

Drawn live on Sky Sports following the culmination of the Quarter Final tie between Bristol City and Manchester United, here are how the ball numbers came out.

The draw was held in the tunnel at Ashton Gate and the talk of the evening, Bristol City, certainly seemed happy with their tie against Pep Guardiola’s side – especially the second leg coming on home soil.