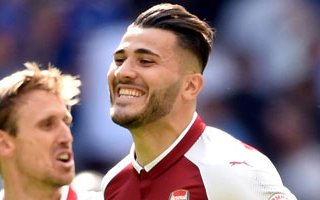 The performance by Sead Kolasinac in the two one victory over Swansea City at the weekend at the Emirates Stadium was enough to earn them a place in the side alongside the other, in the opinion of the former Spurs striker anyway, most impressive performers in the topflight over the latest weekend.

I think we’ll already know ourselves, and not just based on the latest performance, why Crooks, we’ll also not argue with it, selected Kolasinac as part of his team but explaining his choice he told the BBC.

‘I was very impressed with Sead Kolasinac when Arsenal played Chelsea at Stamford Bridge earlier in the season and he has since become a regular feature in the Gunners set-up. Kolasinac only joined the club at the beginning of the season, and on a free transfer, which really does knock the stuffing out of all those Arsenal ‘know it all’ supporters who have been caning Arsene Wenger for not spending millions on players the manager thinks are not worth it. Kolasinac must be the signing of the season and he already looks like a player who has won the respect and admiration of his team-mates. The goal he scored against Swansea was well taken, but the move and assist for Aaron Ramsey to score was just fabulous football from the Bosnia-Herzegovina international. To find yourself so far up the field in open play is one thing but having the composure to handle matters so effectively is something entirely different. If Wenger is free during the international break, perhaps Theresa May might ask the Arsenal manager if he could conduct the Brexit negotiations with European chief negotiator Michel Barnier.’

It’s always good to see the club represented in this way, and well played to Kolasinac for his recognition, but the most important thing about the weekend was of course taking the win.