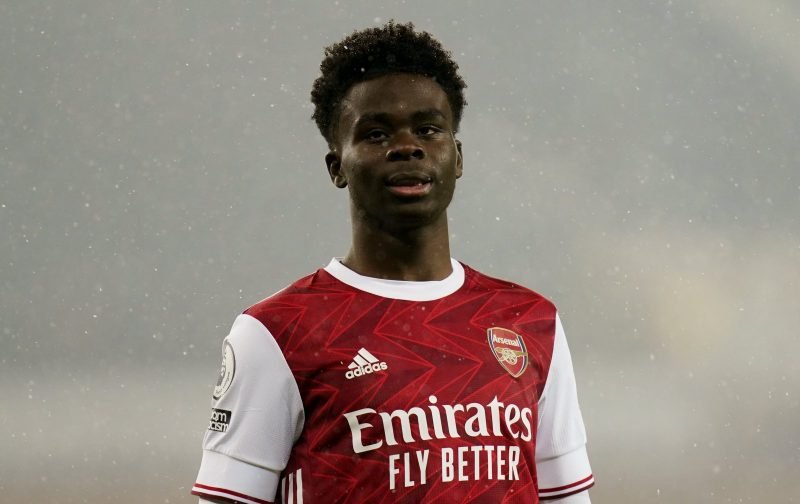 Paul Ince has sent a stark warning to Arsenal youngster Bukayo Saka after his goalscoring display against West Brom.

The England international has enjoyed a sensational last few weeks, winning man of the match in consecutive games against Chelsea and Brighton and Hove Albion before his strike versus the Baggies.

Speaking to Premier League productions, the former Manchester United ace claimed the £86m-rated youngster should keep himself grounded following his rise to stardom.

“He talks well for a 19-year-old kid. But he has to keep his feet on the ground. I have seen a lot of players in my career where we do get over-excited about players. But he doesn’t look like one of those players that’s going to do that.” (via Optus Sport)

The only thing that can keep Saka from reaching his true ability is himself. The young ace has shown that he has the ability to make it at the very top of European football if he carries on at his current trajectory.

Last season, the 19-year-old played five different positions, including across both defence and midfield. His performances were brilliant as he racked up four goals and 11 assists. He’s carried over that form into this season, playing six different positions, whilst scoring three goals and assisting a further three.

His versatility mixed with his ability makes him an invaluable asset to Arsenal as they look to keep the player beyond the peak of his career, unlike many youngsters in years gone by.

Serge Gnabry is the name that sticks out like a sore thumb, when you think of a talented youngster Arsenal have let go. The winger has become one of the hottest prospects in world football and is someone the Gunners can use at this moment in time.

Keeping Saka grounded and at the club is extremely important. He is such an important asset and requires careful handling from the Arsenal hierarchy should they want him to reach his true level.

In other news, Arsenal are interested in signing a Championship ‘keeper.