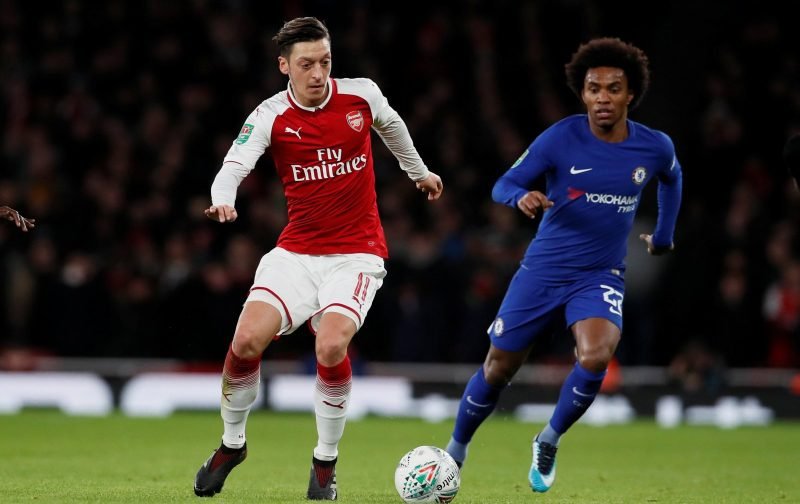 Jamie Redknapp has claimed that it’s a ‘no-brainer’ that Mesut Ozil should return to the Arsenal starting line-up.

In the German’s absence, the Gunners have lost eight of their 14 Premier League games with the playmaker having been forced to watch from home.

Speaking to Sky Sports, following the side’s 2-1 loss away to Everton, the former Tottenham Hotspur man lamented the team’s lack of creativity.

Redknapp said: “No creativity again. I feel for the manager. There are so many problems right now with this team, it’s hard to put your finger on which one is worst. He’s got another problem now, with people saying, ‘Should you bring Mesut Ozil back in?’. For me, of course, you have to.”

“It’s a no-brainer — you are not creating chances. Does the manager look weak bringing him back in? Some might say yes. Not for me.” (via Sky Sports)

It’s hard to put your finger on why the supreme talent was left out of the Premier League squad at the start of the season. Ozil proves to be an incredible player, who once drew praise from Jose Mourinho, who labelled him ‘phenomenal’.

Arsenal’s problems have become far more apparent in recent weeks, and it’s no thanks to Mikel Arteta’s failing tactical plans. The lack of goals have been quite stark with more and more in favour of sitting back against the Reds due to their lack of creativity in the final third. Everton had just two shots on target and surrendered over 57% of possession, why? Because Carlo Ancelotti’s side knew Arteta’s men couldn’t lay a glove on them.

It’s horrible to watch at this moment in time. As an Arsenal fan, I know for a fact we won’t find out way past a deep block. We need Ozil desperately come January, and a failure to add him or any other option from in and outside the club will be hazardous for the remainder of the campaign.