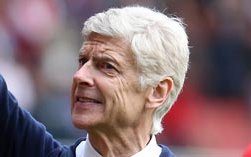 Following today’s clash between Arsenal and Chelsea, here are the instant reactions from both managers.

Arsenal hosted Chelsea at the Emirates Stadium for an 8pm kick off on Wednesday January 24 for the EFL Cup semi final second leg.

Following a scoreless draw at Stamford Bridge in the first leg, neither side had the advantage going into the tie decider but Arsenal booked their place in the final against Manchester City with a two one scoreline on the day.

Eden Hazard opened the scoring as he found the net in the seventh minute, but an Antonio Rudiger own goal five minutes later had the hosts on level terms.

Granit Xhaka poached a goal on the hour mark and that was where the scoring on the day ended.

‘In the first half we gave Chelsea too much respect and distance. We were a bit scared to go for it and we suffered from that. We were not playing in the right position but we amended that in the second half and took control of the game. We knew we could perform better in the second half and that’s what we did. In the first half we watched them play a bit but we were tighter after the break. We lost a great player in Alexis Sanchez but when a team doesn’t know what’s going on in the dressing room there is less clarity and focus on performances. We know we have to deal with it now.’

‘We have some time to prepare for the final but we are happy to take our fans to Wembley. We’ve been there a few times now and we’re happy to be going again.’

‘My thoughts are there is disappointment for the final result. I think my players must be pleased with their effort, we tried to reach the final, we conceded two goals and we were unlucky, two deflections. It is a pity because we had a good run in this competition, it is a pity for me, the players and fans. We started very well, played a good first half and in the second half I saw a lot of balance.’

‘When there is an injury to one of your best players it is not simple, especially when on the bench the only substitute is Ross Barkley. Barkley has a lot of space for improvement, he is working with us only two weeks but for sure today I was forced to make this substitution, but he can improve a lot. I don’t need anything, I’m a coach and I continue with my players.’