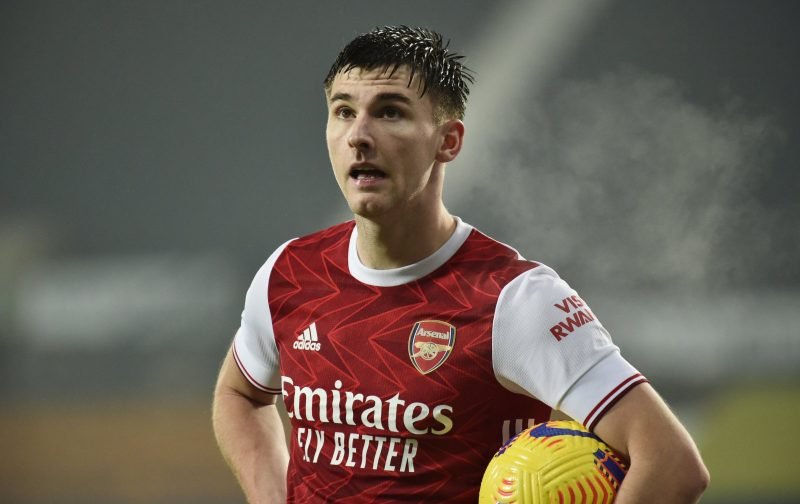 Gary Neville voiced his worries over Kieran Tierney, who he claimed looked ‘weary’ in the early stages of Sunday’s defeat to Manchester City.

The Scotland international made his first start for the club having returned from a strain in his lower right leg just three days earlier in the Europa League clash with Benfica.

Speaking during yesterday’s coverage, the former Manchester United defender spoke of his worry as Riyad Mahrez battled against the full-back.

Neville said: “What a tough start for the game Kieran Tierney has had. He’s a good player for Arsenal, but already he’s been exposed and he’s looking a little weary. They keep hitting it over his head to Mahrez.” (via Sky Sports)

We’ve already seen what rushing a player back from injury can do with Thomas Partey’s recurrence against Tottenham Hotspur earlier in the campaign.

Mikel Arteta pulled the trigger and started the Ghanaian, who had injured himself a month before the game, as the Gunners entered the north London derby on a run of no win across their last three Premier League games. The decision backfired horribly as the African pulled up in the run-up to the second Spurs goal in what proved to be one of Arteta’s worst decisions during his reign.

During yesterday’s encounter, there was periods where Tierney looked out of sorts and given the fact he has just returned from injury it does prove worrying. Lightning can’t strike twice for the north London giants this season because if the Scotsman does get injured, it would make the side incredibly vulnerable at left-back in the form of Cedric Soares.