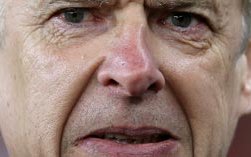 Manager Arsene Wenger has stated that Olivier Giroud will be going nowhere come the January window as he remains an important player for Arsenal.

Speaking to Sky Sports following yesterday’s one all draw with Southampton at St Mary’s Stadium, the topic of Giroud – with him coming off the bench to score our equaliser once again – came up and Wenger was insistent that the Frenchman wouldn’t be leaving when the January window opened.

It was Giroud’s 17th Premier League goal as a substitute and he’s yet to start a game in the league this season and game time has long been an issue, and was a driving factor in his links to Everton last summer although the deal didn’t go through in the end.

The Sunday tabloids again linked him with a move away and when asked the question, Wenger explained.

‘He is important – why should we lose an important player? It is up to us and not Giroud. He will start more games. I believe as well it’s always the same when you have many good players, some of them cannot play.’

Wenger went on to say.

‘The question you get is always why does the guy who is good not play? Because if you take him on you have another guy who is good who will not play, it is as simple as that.’