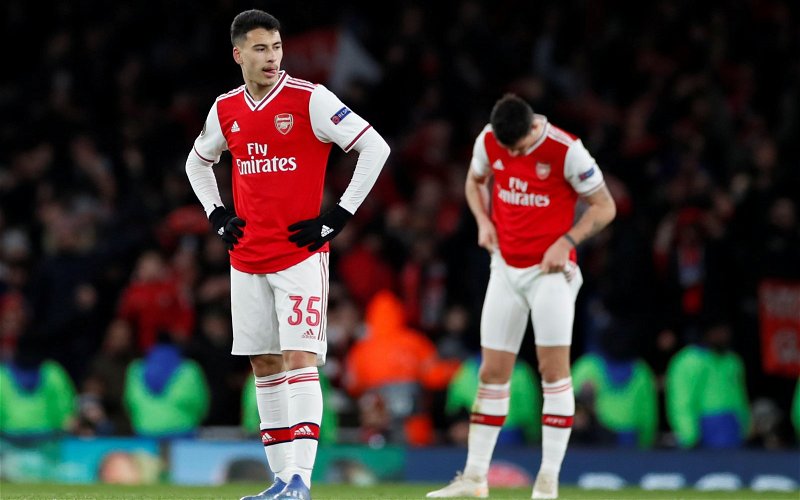 With the season very much looking like Europa League or bust, just what does the future hold for Arsenal and Mikel Arteta without Champions League, or even European, football?

Today’s Europa League tie versus Slavia Prague sees the Gunners head to the Czech Republic drawing 1-1 after the first leg at the Emirates Stadium. That last-minute away goal could be crucial for a side, who are yet to lose at home this season.

However, should Arteta’s men fail to overturn the deficit, you’d wonder just what will happen for both the squad and even the Spaniard himself.

Pierre-Emeric Aubameyang looks to cut a frustrated figure in recent months after enduring what can only be described as a horrid season. The Gabon international has scored just 14 times this campaign and was seen (and heard!)  leaving the Emirates Stadium after being dropped to the bench for disciplinary reasons ahead of last month’s north London derby.

He may have just signed a new contract last September, but, it’s not out of the realm of possibility that the ace leaves the club especially without Champions League football and his relationship with his manager under serious strain.

There is also worries over a potential squad clearout. Arsenal have known for a few seasons now that the squad is far from ideal for a team who wants to play Champions League with the last few Premier League campaigns bearing witness to that.

But, should the club not qualify for European competition, selling players could well be a major difficulty. Some of the players are on ridiculous wages at the club and wouldn’t attract attention from major European clubs or, even, the smaller ones for that matter. Finding an inbetween seems to be difficult as was seen in the cases of Shkodran Mustafi and Sokratis, both of whom failed to secure transfers away so had their contracts terminated.

Then there’s concern over Arteta and his future at the club. This year has been far from ideal for the north London giants, who sit an abysmal 9th in the league standings. Reports have emerged claiming that the club are tracking Maurizio Sarri ahead of a potential move for the Italian. You’d think a poor start to next season following a campaign where European football wasn’t secured could be the nail in the coffin for the former Manchester City man.

Whatever happens, it seems tonight’s clash with Prague could shape the very future of the Gunners with various factors coming into play. Lose and the rain may keep pouring in N5.