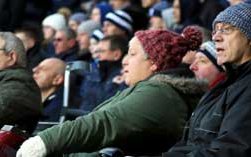 On Friday evening it was confirmed that four clubs had failed to honour their self set deadline for basic access standards for disabled fans.

The Accessible Stadia Guide recommendations back in August 2015 saw Premier League clubs commit to improvements to fall into line with the guidance by August 2017, and with some making reasonable progress, back in April of this year, a number of clubs looked like they would struggle to hit that deadline.

Those four clubs being Chelsea, Crystal Palace, Watford and Everton.

With promotion and relegation, other clubs still have time, and out of the 16 clubs this ‘deadline’ applied to, with 12 now meeting the basic criteria that is obviously a huge step in the right direction.

Charity Level Playing Field admit that those clubs who haven’t made the necessary improvements have ‘let their disabled fans down’ but they were also ‘keen to recognise improvements made’.

The four clubs mentioned obviously have their own plans in place for future compliance, Watford for example are 40 spaces short of the ASG target, but they do not sell out those area and are looking to boost demand before adding additional bays.

The Premier League also noted issues Chelsea, Everton and Crystal Palace have owing to the age of their stadiums and development issues, but Palace have still added 66 new bays, with Everton adding 54. Chelsea have recently secured planning permission for a Stamford Bridge redevelopment.