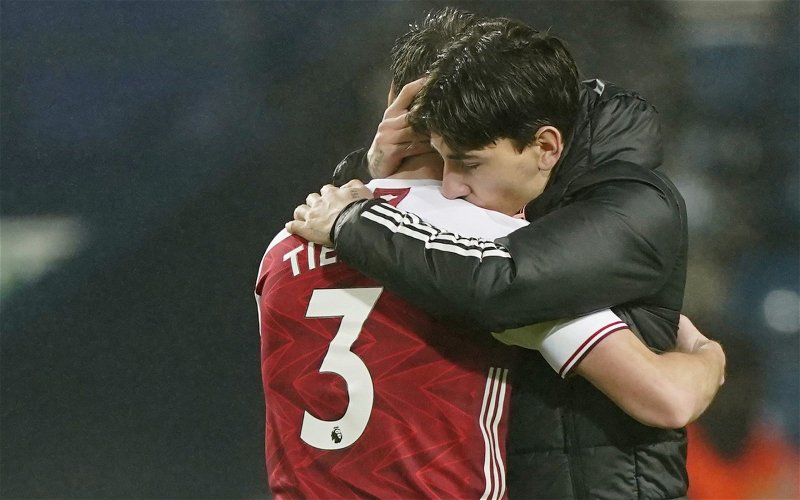 Kevin Campbell has claimed that Hector Bellerin’s place in the starting XI is not under threat despite the fact he missed two games in a row.

Having been benched for the 3-1 win over Leicester City, Mikel Arteta opted for Calum Chambers during last week’s 1-1 draw with Burnley. However, the Spain international returned to the side for the win over Olympiacos in the Europa League last night.

Speaking to Football Insider, the former Highbury favourite insisted that the 25-year-old was being rested due to a schedule that sees Arsenal play four times in nine days.

Campbell said: “I think Cedric was carrying an injury and obviously there’s a big game in midweek against Olympiakos. I don’t think he [Bellerin] was snubbed because I think there are four games in nine days. I think it’s just the manager using his brain and getting a player a bit of rest where he can because there’s gonna be a lot of football played.”

“But there is a clamour for the football club to search for a recognised right-back. The fanbase are not happy with the production of Bellerin.”

Whilst Bellerin’s inclusion does raise eyebrows due to his recent performances at right-back, you can understand the move from Arteta.

The Gunners have already endured a gruelling season which has seen the club play 40 games in just 180 days since the campaign began away to Fulham back on September the 12th last year. That averages out to a game every four days and highlights the brutal nature of the season during the current pandemic.

And with Arteta eyeing a prolonged run in the Europa League, you can expect further shock starting line-ups in the coming months as the Reds eye a place in next season’s Champions League.

However, from a pure quality perspective, Bellerin does hinder the side’s attacking prowess down the right-hand side, an issue tackled last week on the site.

His inability to link-up effectively with whoever plays ahead of him really hinders Arsenal’s ability to attack down the right. It makes his constant starts a real head-scratcher especially with Cedric Soares having played so well in recent games.

In other news, Tottenham Hotspur have joined Arsenal in the race for a Premier League midfielder.