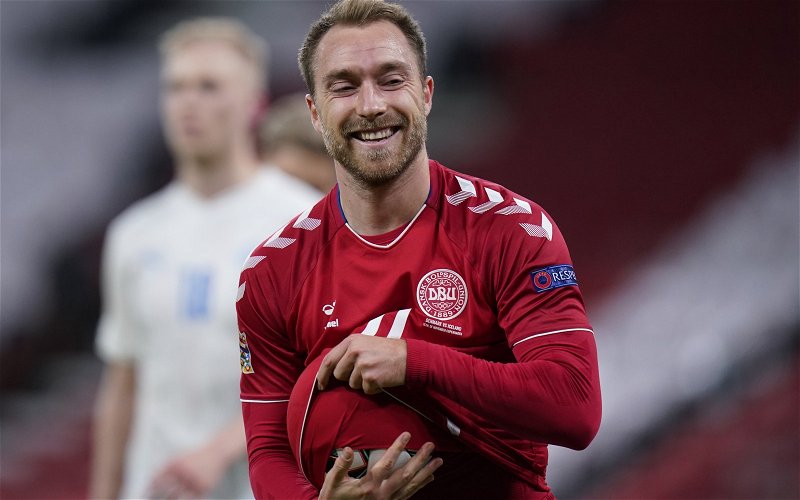 Fabrizio Romano has claimed that Arsenal aren’t interested in making an immediate move for Christian Eriksen despite having been offered the midfielder.

The Dane is surplus to requirements over at the San Siro with Internazionale CEO Marotta claiming the former Tottenham Hotspur man has been transfer-listed.

Speaking on his Here We Go podcast, the famed Italian journalist believes the Gunners could be targeting Houssem Aouar or someone else.

Romano said: “He has been offered to Arsenal, but we always said that he’s not the first choice for Arsenal. So, let’s see what Arsenal will do for their first choice – if it will be [Houssem] Aouar or another player – but at the moment, Eriksen is not the first one.”

“…at the moment, Arsenal are not moving for Eriksen and he is not the first option; he has been offered.” (via Here We Go)

This is extremely exciting news given how well the Denmark international has performed during the course of his time in England. If the Reds are turning down the chance to sign Eriksen, it hints that there is a list of more exciting targets in place which the club are sticking to.

Players like Norwich City’s Emiliano Buendia and Aouar have been linked with making a move to the club in January. Both would prove far better options purely because they are younger. At 22 and 23-years-old, both the French and Argentine aces have years ahead of them both in terms of development. The same can’t be said for the 28-year-old, who is realistically looking at one last big move in his career.

Both youngsters have also performed relatively better than Eriksen this season with the Canaries man having combined for 12 goal contributions in 16 league games whilst the Lyon midfielder has combined for six in 11 outings. It seems the £45m-rated Serie A man has somewhat struggled this season, scoring and assisting no goals across his 12 games in all competitions.

Age and form firmly places Eriksen as the third-choice for the Gunners out of players they’ve been linked with recently. In any case, I can’t imagine signing a player, who proves to have attitude problems is the best idea given how prevalent the issue is with the current Arsenal crop.

In other news, Sam Allardyce has made a stunning claim about the Gunners.