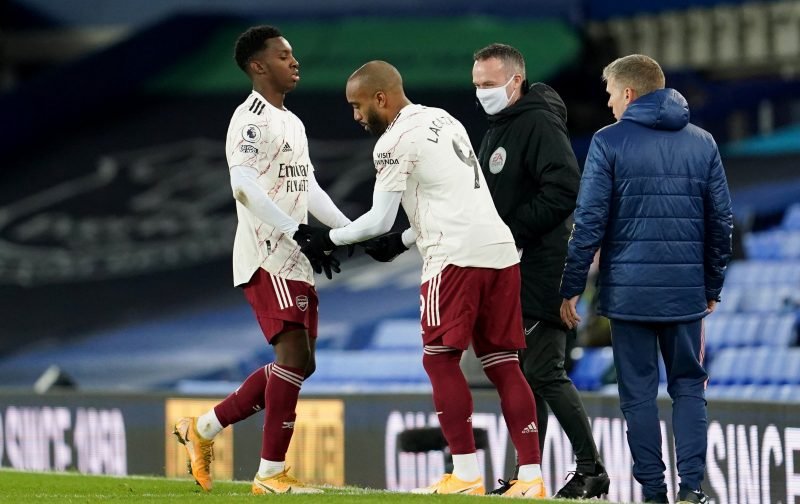 Charles Watts believes Arsenal want to cash in on both Alexandre Lacazette and Eddie Nketiah in the summer transfer window.

Both players will enter the final year of their deals at Arsenal at the end of this season with no signs of talks with either party.

Speaking on the latest edition of his show, the journalist has claimed that the duo will be surplus to requirements at the end of the campaign as he hinted at further action in the transfer market.

Watts said: “You look at Lacazette, Eddie Nketiah, both have gone down to the final year of their contract. What are Arsenal going to do with two of their squad strikers? One of them’s basically a first-team player in Lacazette. What are you going to do with those two? I would say they probably want to cash in on both, so something is going to have to happen there.”

You’d like to think that if Arsenal were to get rid of both players, there would be one, maybe two, replacements incoming. However, it seems the current pandemic has escaped the mind of Goal’s Arsenal correspondent, who’s seemingly forgetting the Gunners lack the necessary funds to make profound acquisitions.

It’s hard to see how Mikel Arteta can sanction the release of two first-team players, maybe three if Folarin Balogun leaves as expected, without buying the necessary replacements.

Should things pan out as expected, it would leave Pierre-Emerick Aubameyang as the only striker at the club and with the Gunners likely to be competing in three to four competitions next season, it’s nowhere near enough.

However, further on from just losing options, how do the Gunners go about replacing a player like Lacazette, who proves to be an extremely well-rounded player? The lack of realistic options on the market make any sale of the 29-year-old extremely tough.

Meanwhile, Arteta himself has laid praise on the shoulders of Nketiah, blaming himself for the England under-21 international’s lack of game time recently. You feel that given how highly the Spaniard rates the Hale End academy product, it would be surprising if he was to leave.