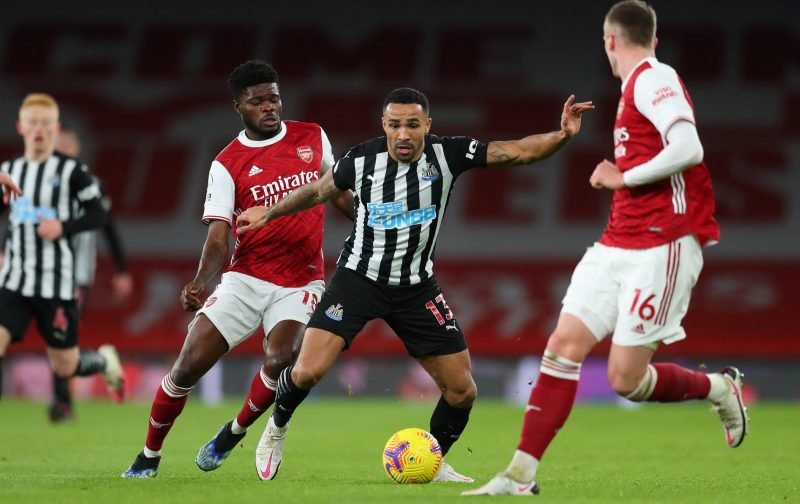 Arsenal marched on in their pursuit of a top-four place and Champions League football as they swept aside Newcastle United 3-0.

It seemed to be a game of two halves as the Geordies stood strong in the opening period before the Gunners ran rampant in a second-half that saw three goals.

However, there was one thing which would’ve impressed manager Mikel Arteta more than anything and that was the return of ‘Champions League player‘ Thomas Partey. The Ghanaian was in staggering form as he ran the midfield alongside Granit Xhaka.

His ability to pick up the ball and either run with it or make a forward pass has added another dimension to an Arsenal midfield that had stagnated in his absence. The likes of Mohamed Elneny and Dani Ceballos were tasked with adding an authoritative spark in the centre of the park and it’s fair to say they haven’t been up to standard.

In his first start back from injury, Partey played 43 of his 58 passes forward, a stunning 74% of his entire total. 19 of them were into the final-third as the former Atletico Madrid man penetrated the Newcastle formation.

However, the £45m-rated ace also continued to act as a shield in front of the Gunners’ back-four, making three interceptions as he thwarted any hope the Geordies attempted in building attacks.

There must be some context, after all Mikel Arteta’s side were playing a quite poor Newcastle team, who haven’t scored in just under 500 minutes of football. The game will tell very little, if anything, with far more tougher excursions on the way for the north London outfit, including back-to-back clashes with Southampton.

Partey’s re-introduction into the fold has added a lot more to the Gunners’ attack and defence as they look to chase down an elusive Champions League place. However, with far-superior opposition on the horizon, we’ll learn far more about the dynamic midfielder in weeks to come.

In other news, Shkodran Mustafi sent a bizarre message to Mesut Ozil amid his departure from the club.