Bellerin Always Had Belief In Ozil 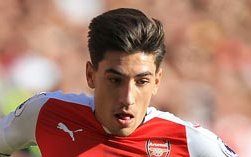 With Mesut Ozil ending speculation about his future last week and penning a new contract at Arsenal, Hector Bellerin has said the squad always ‘knew he was going to stay’ despite the constant reports in the media.

Last Thursday Ozil did of course sign a new long term deal at the Emirates and he will be looking to build on his appearance numbers and hopefully silverware in the coming seasons, but speaking to the Official Site over the weekend, Spaniard Bellerin admitted that everyone at the club always expected him to stay given how he enjoys being with us.

‘Everyone in the training ground, everyone in the team knew he was going to stay. He is a guy that loves London, loves Arsenal and he always gets really angry when things don`t go well. So you know how much it means for him to win or lose for this club. So I think everyone in the club, the dressing room, was sure.’

It’s not the first time a player has hinted that Ozil would stay, but to be fair some interviews were given expressing similar about Alexis Sanchez and of course as we know that didn’t come to pass, but Bellerin feels that Arsenal fans should be upbeat with him signing on when it comes to the future.

‘It is as exciting as a new signing. To have a player with Mesut`s qualities and all he brings to the team to sign for a few more years, it is really exciting for Arsenal and for the fans.’

He also believed that there was a renewed strength of ambition in the camp following the arrival of Henrikh Mkhitaryan and Pierre-Emerick Aubameyang having seen them in training and of course in the weekend’s heavy win over Everton.

‘Today I was in the game and I`m seeing the other players we have up front, and even the players we have on the bench who can come on. It makes you think that the creativity and electricity they bring into the team is something that is very rare to find in any other team.’