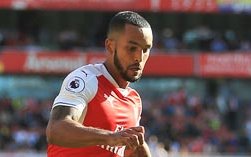 Everton manager Sam Allardyce has confirmed that the club are negotiating with Arsenal for Theo Walcott.

Speaking to the BBC as he met with the media this week ahead of their game against Tottenham Hotspur, Allardyce confirmed the speculation in the press that had suggested Everton had moved ahead of Southampton in the chase for Walcott, but he did comment that a deal was not yet done and nothing was imminent.

‘If it’s possible to be over the line I’d be delighted. It’s not imminent but negotiations are ongoing.’

Allardyce described Walcott as a potential ‘fantastic addition’ who would give them a better ‘goalscoring threat’.

Walcott’s future at Arsenal has long been a source of debate and he would depart having played 395 times for the club.

Arsenal manager Arsene Wenger is believed to have told Walcott he wants him to stay, but he cannot guarantee greater game time.

‘We still have a good relationship and I don’t want him to be frustrated or lose any opportunity to play in the World Cup, because Theo went to the World Cup in Germany in 2006 and we are now in 2018 and he’s not been since for different reasons. That of course is a sensitive subject.’

‘He’s scored 100 goals for Arsenal from wide positions. His pace is a key strength which we lack. To add goals would be very important for me. And he’s only 28. If that can be sorted out it would be a great addition from an attacking point of view. I don’t think there’s a chance of a loan. I don’t get optimistic otherwise I get disappointed. I’ll be very excited and enthused when someone, even if it’s not Theo, has signed on the dotted line.’