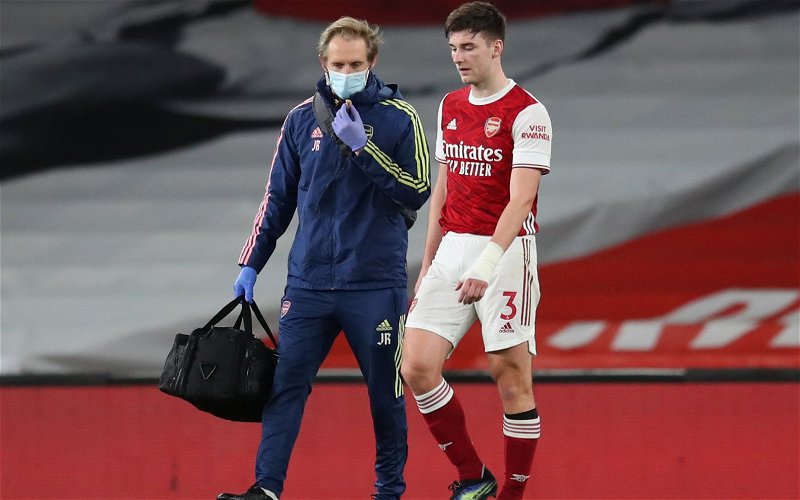 Arsenal have confirmed that Kieran Tierney will be ruled out for between four to six weeks after his clash with James Milner in Saturday’s loss to Liverpool.

The Scottish defender trudged off with a less than optimistic expression on his face during the first-half in the defeat to Jurgen Klopp’s men and reports claimed he could be out for several weeks.

However, in his press conference ahead of today’s clash with Slavia Prague, Mikel Arteta sounded optimistic the ace could yet play a part for the Gunners this season.

Arteta said: “I don’t know, we’re going to have to go day by day to see how Kieran is feeling, how he is reacting. When we get close to playing time and training with the team, depending where we are and how he’s feeling, we’ll make a decision.”

Most people associated with Arsenal probably know by now just how important the 19-cap Scotland international is to the side. His ability at both ends of the pitch has shone through brightly this season, making his absence a bitter blow.

We’ve got a sneak peek at just how badly Arteta’s men have struggled without the 23-year-old and it doesn’t paint a pretty picture for the rest of the campaign.

In 13 games across all competition without Tierney, the Gunners have won just seven with one of those being a penalty shoot-out victory over Liverpool in the Carabao Cup.

In his stints out of the side due to injury, Cedric Soares has been asked to fill the void and his displays have left a lot to be desired. His inability to play with his weaker left foot has often slowed down Arsenal attacks and even cost the team goals.

Given how badly the injury was first thought to be, the Reds can count themselves lucky that the defender is only out of between four to six weeks. His return towards the end of this season could boost team’s chances of going all the way in the hunt for Champions League football.

In other news, Arsenal have reignited their interest in a Premier League winger.