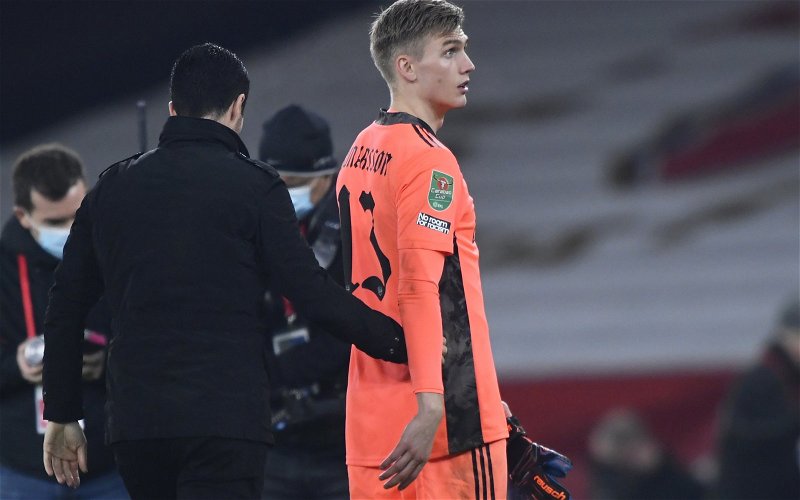 Arsenal are allowing Alex Runarsson to leave the club on a loan deal during this transfer window, according to David Ornstein.

Ornstein has claimed that clubs from the Championship and around Europe have registered their interest in the Gunners number two, who will be allowed to leave if the team secure a replacement.

The Icelandic ‘keeper has endured a nightmare start to life in north London, making a number of errors across his five games this season.

Whoever sanctioned the signing of the ‘keeper from Ligue 1 last season needs to be seriously questioned. There were red flags before the outfit had even completed a move for the Iceland international with Get France Football News vocal about the player’s weaknesses. In an article posted back in September 2020, the publication listed problems with the former Dijjon player’s distribution, aerial ability and positioning as the Gunners looked to complete a transfer.

It seems our worst nightmares have been realised with Runarsson showing off all his weaknesses after just five games with the north London giants.

During the clash with Manchester City, he took up some strange positions during free-kicks, something that was picked out by Riyad Mahrez, whose effort was eventually spilt into his own goal by the 25-year-old.

And for a team, who pride themselves on being able to pass out of the back, to sign someone who is poor with the ball at his feet is very strange. Runarsson posted a 70.7% pass accuracy against Pep Guardiola’s men, spraying the ball out of play on numerous occasions.

If things were flagged up by a website, who aren’t even actively scouting the player in order to sign him for a club, you’d have to assume the Emirates Stadium outfit had the same analysis available. The signing of Runarsson is very weird and can be put down as another failure by the club’s already underperforming transfer committee.

In other news, Fabrizio Romano has revealed that one Arsenal man is set to stay this month.