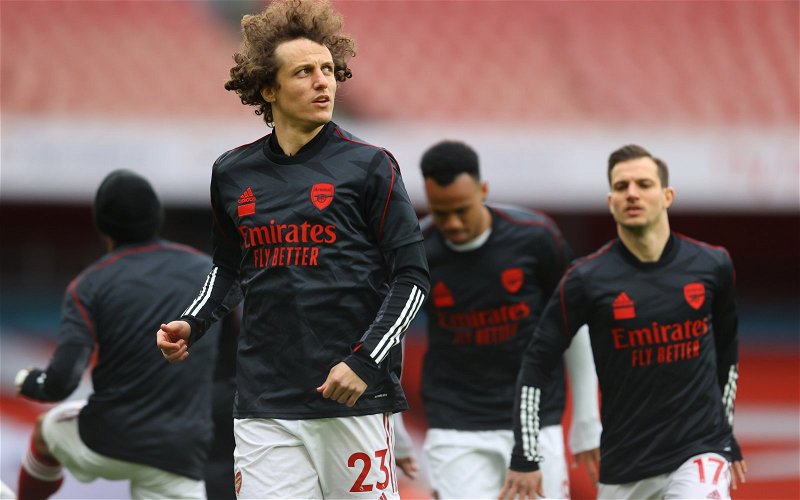 David Luiz has returned to training ahead of Arsenal’s crucial Europa League semi-final first-leg versus Villareal this Thursday.

The Brazilian has been out of action since having minor surgery on a knee injury with his last game proving to be the 3-3 draw away to West Ham United.

Since his absence from the starting XI, the Gunners have failed to keep a clean sheet across any of their games across all competitions.

A quicker than expected return action is exactly what Mikel Arteta would’ve ordered as the north London giants walk towards one of their biggest games of the season.

The Premier League form has taken a stunning hit in recent weeks and the loss at home to Everton last week has only further strengthened the point that European football via the Premier League is nigh-on impossible.

It really does feel like it’s Europa League victory or bust for the Emirates Stadium giants, who are entering the final stretch of the season with arguably their best passer back to full fitness.

In Luiz’s absence, Rob Holding, Gabriel Magalhaes and Pablo Mari have been asked to fill in, however, none of the trio can provide the outball from defence that the 33-year-old can.

Passing has been a real strength of Luiz’s this season with the Brazil international averaging the most long balls of any Arsenal centre-half.

Arteta’s men are in a position where they really can’t afford to blank, and after four games with a goal or less out of the last six, there is real worry over the creative nous of the Gunners side. Luiz is a player who undoubtedly improves the flow of the side’s passing and is a welcome addition back to the squad ahead of the reunion with Unai Emery.#

In other news, a trio of former players are joining a takeover bid of Arsenal.