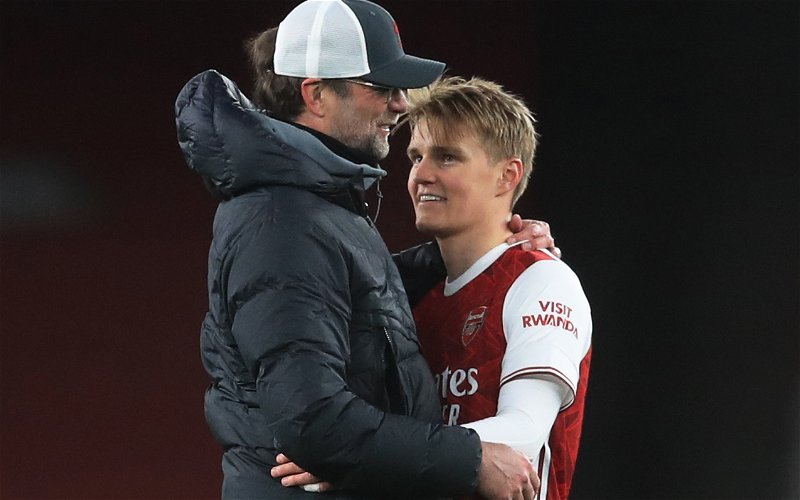 Arsenal have confirmed on their official website that Martin Odegaard is back in light training ahead of Arsenal’s clash against Everton on Friday evening.

Odegaard has been out with an ankle injury he sustained whilst on international duty with his country Norway back in March.

The Gunners are looking to bounce back from their disappointing draw at home to Fulham last weekend, where it took a 97th-minute goal from Eddie Nketiah to salvage a draw for Mikel Arteta’s men.

Recent games have been quite up and down for the side in terms of chance creation. Whilst the attack proved simply phenomenal against the likes of Slavia Prague and Sheffield United, the team from the first half of the season returned versus the Cottagers.

The performance versus Scott Parker’s men left a lot to be desired as the side created just five shots on target from the 18 attempts they had on Alphonso Areola’s goal.

It was more of what we witnessed during the stunning seven-game winless run from the back end of 2020, a dark period of what has been a turbulent campaign.

Whilst, we can’t pin our hopes on Odegaard being the second coming of the Messiah, he has added a breadth of quality to the team since his arrival from Real Madrid. His ability to pick a pass has no doubt increased the quality in the final third adding a new dimension to the Gunners attack.

In a game against such tough opposition, Arsenal will be hoping for the return of their £36m-rated attacking talisman, who has proven so crucial thus far this year.

In other news, Arsenal’s European Super League statement outdid that of their big-six rivals.